Ugandan graduate student Ivan Chapu has dedicated himself to adapting handheld sensors to help groundnut breeders generate resilient varieties that will help farmers to succeed. His passion for new technology led him in an unexpected direction – into a peanut field – where the Makerere University master’s student also discovered a love for research and hopes to continue studying groundnut as he pursues a PhD in crop physiology.

Chapu works on one segment of a larger project to validate and use hand-held sensors, such as Trimble’s GreenSeeker, as well as thermal and RGB cameras, as high-throughput phenotyping (HTP) tools.

In the United States, this equipment is already proven to be successful in assessing plant stresses, such as drought and disease, in wheat and corn. His job is to determine how effective these machines are at identifying biotic and abiotic stresses that affect groundnut yield in Africa.

After receiving his undergraduate degree at Makerere in science and horticulture, Chapu met  David Okello, the chief groundnut breeder for the National Agricultural Research Organisation (NARO) and a longtime collaborator with the Feed the Future Innovation Lab for Peanut.

At the time, his only experience with groundnuts was growing and harvesting the crop with his family, but Chapu knew he wanted to work to develop new farming technology, an opportunity he found with the Peanut Innovation Lab.

The High-Throughput Phenotyping Project is led by Virginia Tech’s Maria Balota, a specialist in peanut productivity and crop stress physiology. The goal is to advance peanut breeding by developing tools that diagnose plant health quicker and with more accuracy. The adapted HTP equipment assesses the fitness of groundnuts by taking images that analyze physiological qualities, such as canopy temperature and plant leaf color. Those images are analyzed with specially developed software that records the stress level of each peanut variety from their visible characteristics. The data collected by Chapu, and other graduate students in Senegal and Ghana, will determine which peanut lines have favorable genetic traits. Breeders can then utilize this information to develop resilient strains faster.

When farmers and breeders rely on their visual observations to determine the stress level of the crop, the information is subjective and only guesses at how that stress might impact yield.

The HTP technologies that Chapu used can objectively identify the physiological markers of common stresses such as Late leaf Spot (LLS), Groundnut Rosette Disease (GRD), and drought. The equipment analyzes canopy images and provides a numerical value that indicates the plant’s health. For example, the GreenSeeker processes the canopy's health status and provides a value from 0 to 1 for the plants’ vigor. Groundnut crops with a value closer to 1 are considered healthy and have a higher drought resistance, while those with a value closer to 0 are more stressed.

Chapu set up his first round of experiments in October of 2019, just a few months before the pandemic hit.

He was able to attend virtual training with Balota, but “the beginning was kind of tough," he said.

“Professor Maria was supposed to come over to Uganda and teach us how to use the equipment, but due to the Covid-19 pandemic this wasn’t able to happen, so I had to learn everything mostly by myself,” he said.

The first round of work allowed Chapu to gain experience working with the equipment and train other technicians. Once training was completed, a second experiment was set up in April of 2020 across two locations.

He started with visual measurements, then repeated with the HTP machines.

“In my analysis I try to relate and see if the HTP tools are as good as the visual tools and the tools that were previously used by the breeders. If I find that there is a good relationship then I can recommend it based on specific parameters,” he said.

Once his subjective, visual assessments were recorded, he used the RGB camera, GreenSeeker, and thermal camera. Each tool provides objective data on phenotypic qualities such as plant vigor, the severity of leaf spot, and groundnut rosette infection.

The GreenSeeker determines the normalized difference vegetation index (NDVI), the thermal camera determines canopy temperature, and the images from the RGB camera provide indices such as green area and the crop senescence index.

The indices generated by the RGB camera allow Chapu to determine the size and biomass of the plant. The software analyzes the canopy image and postulates the number of green pixels found within the picture. Chapu has found pixel quantity to be a direct correlation to the plant's biomass and potential yield. The images taken with the thermal camera are also capable of predicting a plant's yield.

“I have realized that plant’s with cooler canopies are most likely to give off higher yields and it’s also the same with the biomass,” he said.

His inexperience with groundnuts and limits of the Covid-19 pandemic made the initial stages of his research demanding. His experiments were spread across two locations about 250 kilometers apart, one at NaSARRI, Serere and Nakabango, Jinja, which was challenging with travel restrictions.

In terms of the machinery itself, Chapu said that the biggest issue was with access to electricity. The equipment drains power and once the batteries ran out in the field, it wasn’t easy to find a charging station.

Due to the region’s common power outages, Chapu can sometimes go two to three days without electricity. He says “the infrared camera can take about 300-600 photos before the battery is out,” which he claims to be an issue “especially because sometimes the images need to be taken at particular time points and if you miss it then you may miss out on very sensitive data that you wanted to collect.” Although the camera is able to hold more than 600 images, without access to a charging station Chapu is limited in the amount of research he can conduct before running out of battery.

Chapu will finish his work on the high-throughput phenotyping project in March 2021, but he hopes to continue to work with groundnut breeders.

“I’ve fallen in love with what I’m doing,” he said. “I plan to stay with the breeding program and see what more I can add.”

He hopes to continue toward a PhD in crop physiology at Makerere.

“Working with the Peanut Innovation Lab has been an amazing experience and I don’t believe I would have gotten this experience from anywhere else,” he said. 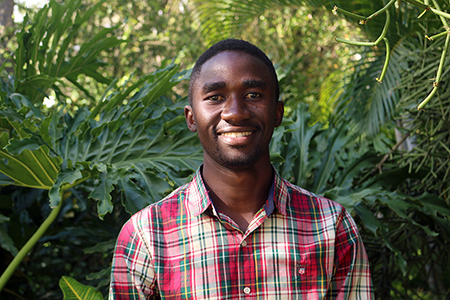 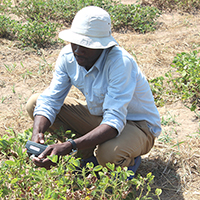 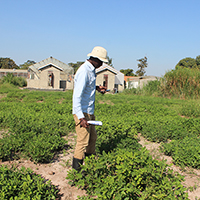