Hemp is a promising new industry for profitability, but growers of this newly legal crop will face a mix of public opinions according to University of Georgia research into challenges those in the hemp business may face in the southeastern United States.

A recently published article in the Journal of Agricultural and Applied Economics identified the concerns nearby residents may have with local hemp production and processing. The study was led by UGA College of Agricultural and Environmental Sciences faculty Benjamin Campbell and Julie Campbell in collaboration with Adam Rabinowitz at Auburn University.

“We got involved in doing hemp economics two years ago when it was passed with the legislature,” said Benjamin Campbell, associate professor and UGA Cooperative Extension specialist in the Department of Agricultural and Applied Economics. “We started asking if there would there be a negative perception or externalities associated with these hemp processors coming [into communities].”

With the passage of the 2018 U.S. Farm Bill, hemp was legalized as a crop in all states. Though hemp is not a novel crop, the legislation opened opportunities for markets in new areas and resulted in a fast push to produce and process the plant. The research team initially examined budgeting and markets surrounding hemp but found there was a lack of research in hemp production perception. They sought to identify potential problems that could arise in communities where the crop is grown and processed into various goods.

“We kept seeing people concerned about light pollution and the smell in popular press-type reports,” said Julie Campbell, an assistant research scientist in the Department of Horticulture.

The group put together a list of questions that was distributed via an online survey to southeastern U.S. residents. The responses were representative of the population, with consideration to household income, race, education level, age and gender.

The survey examined whether respondents had any concern about the growing of hemp and the creation of hemp products in their area.

The research also revealed that education level does not necessarily dictate the amount of concern. Respondents with a high school education or less and those with graduate degrees expressed more concern about local hemp production and processing than those with a bachelor’s degree.

“There’s not one consumer. There’s a whole various subset of consumers that believe different things,” Ben Campbell said. “Surveys allow us to understand these different groups and assess what their perceptions are. This helps us inform these groups so they can understand what’s going on with the new technologies.”

Differences between hemp and marijuana

Though hemp and marijuana are identical in appearance, the determining difference between the two is the level of tetrahydrocannabinol (THC) present in the cannabis plant. THC is the chemical responsible for most of marijuana's psychological effects, but its levels are strictly regulated in commercial hemp crops. Ben Campbell said a resulting concern is consumer belief that hemp is the same as marijuana, though smoking a hemp plant does not result in a high.

“For years there have been entire drug campaigns saying, ‘Marijuana is horrible.’ People associate hemp and marijuana as being the same thing. Now all of the sudden we’re saying, ‘Hemp is good.’ It’s kind of hard to have people turn on a dime,” Julie Campbell said.

While the plants have different chemical compositions, their matching appearance leads to concerns of illegal activity.

“You have people breaking into fields in other states and stealing hemp plants because they think it’s marijuana. That’s one of the externalities I was looking at — illegal activity,” Ben Campbell said.

The survey examined the perceived concerns of respondents and found that the potential for illegal activity and overall safety were the highest-rated concerns for both local growth and processing.

Therefore, engagement with communities to dispel myths about hemp and to educate about its benefits is crucial. These efforts should also address issues of local concern to help neighborhoods feel more comfortable with the hemp firms in their areas.

“I think it brings up a point that you need to have producers and processors interacting with their neighbors to show them what they’re doing and alleviate any concerns so that they are informed. If not, you’re going to have people believing that you’re hurting them or harming them when that may not be the case. That’s the biggest overall takeaway,” Ben Campbell said.

Julie Campbell said this research provides a perspective on what hemp firms will need to consider before investing money and establishing themselves in a community, especially considering the government hearings businesses must go through for community input. However, she said communication and education on this matter will be up to both industry and academia.

“People growing hemp, people growing medicinal marijuana – it’s coming,” she said. “We have to be able to do research on this so that we’re not left behind. People are looking to the university for guidance on this.”

The questions and results from this study will inform future consumer surveys. Recently, Ben Campbell received a Federal State Market Improvement Grant from the U.S. Department of Agriculture (USDA), in collaboration with Auburn University, the University of Delaware, and the University of Kentucky, to conduct monthly consumer surveys over the next three years, allowing for further hemp research, among other public perception and marketing surveys.

Ben Campbell’s research and Extension efforts are devoted to better understanding the consumer marketplace for horticultural products, notably green industry products. He has more than 15 years of experience in conducting market and production economics research throughout the U.S. and Canada.  His work has focused on market intelligence, market identification and the economics of production for varying horticultural commodities. 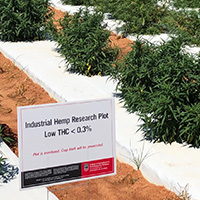