By Sean Montgomery for CAES News

Following the onset of several major outbreaks of foodborne pathogens traced back to wildlife, buyers of farm-fresh produce began encouraging the removal of natural habitats and nesting areas on farms to discourage wildlife intrusion.

As this tactic became a preventative measure targeted at limiting farmland contamination due to wildlife presence, Olivia Smith, a postdoctoral researcher in the University of Georgia’s College of Agricultural and Environmental Sciences, began to focus her research on identifying the food safety risks posed by wild birds due to agricultural intensification — examining the various relationships between farming practices, land-use practices around farms and crop contamination by birds.

With populations of birds already rapidly declining due to repercussions from agricultural intensification, this solution is particularly problematic because farmland remains an important habitat for many species of birds.

“Birds provide important insect pest control services to sustainable farmers, so removing birds makes it harder for these farmers to farm without pesticides,” said Smith. “Therefore, it is extremely important to understand how much of a problem birds are likely to be for food safety and how we might reduce that risk.”

With foodborne illness remaining a major concern in the U.S. and abroad, this in-depth research is important for harmonizing food production and wildlife conservation, while preserving the general health of consumers around the globe. Despite widespread fear that birds are a major cause of foodborne illness, Smith’s studies showed only one conclusive study linking foodborne illness back to birds.

“One of the greatest challenges of our time is to figure out how to feed 8 billion people while supporting a healthy environment for future generations,” said Smith. “Bird populations have been rapidly declining, with an estimated 3 billion birds lost over the last several decades. Meanwhile, a growing body of research has shown that biodiversity provides important pest control services to farmers. Thus, it is timely and imperative to understand how to best comanage conservation, food production and food safety.”

Smith’s findings, which were published in the Journal of Applied Ecology, suggest that these natural habitats around farms should be preserved, as they may be beneficial for both food safety and wildlife conservation efforts, despite current recommendations for promoting food safety within the industry.

“We began the research to understand how much of a problem birds are likely to be for food safety for small-scale, organic farmers and how farm management and land use surrounding a farm impact that risk,” said Smith, who works with Department of Entomology Professor Bill Snyder. “It is extremely important to understand the risk wild birds pose to food safety for several reasons.”

Beginning in April 2016, Smith began accumulating hundreds of hours of data collection and collaborating with researchers across the country to prepare a manuscript for publication. Her leadership and dedication to the project garnered praise from Snyder, who served as co-senior author to the paper.

“Olivia entirely led the field research that the paper reports, and also all stages of data analysis and manuscript preparation,” said Snyder. “Her project was challenging because it included an interdisciplinary team of researchers spread all across the country, yet she enthusiastically took on the challenge to herd this big group of cats. Her remarkable success in publishing her work is proof of just how effective she was as a team leader.”

Snyder echoed the importance of Smith’s study and the impact it will have on the food production industry and wildlife worldwide.

“Wildlife is thought to be a key threat to food safety, which has led to pressure for growers to remove natural habitats from their farms,” said Snyder. “Olivia has made a major contribution by showing the natural habitats on farms are the solution to, rather than the cause of, food safety threats posed by wild birds. This is because diversified farms attract the native bird species least likely to spread human pathogens. So, Olivia has shown that there is no conflict between food safety and bird conservation — quite the opposite, as the two actually go hand in hand.”

Through her work, Smith hopes to inspire a younger generation of researchers and students to keep moving forward even when times get tough.

“Carrying out a research project from start to finish comes with many challenges, but dedication and commitment will get you through to the end,” said Smith. “It is important to have confidence and push forth with your ideas.”

To learn more about the UGA Department of Entomology, visit ent.uga.edu. 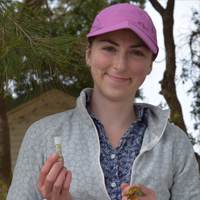 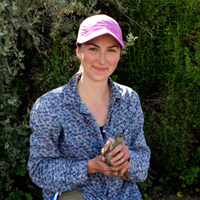 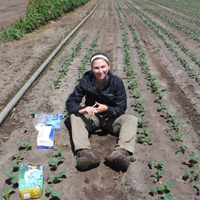