Three University of Georgia faculty members and one doctoral candidate from the Department of Poultry Science in the College of Agricultural and Environmental Sciences have been honored by the Poultry Science Association.

The status of Fellow is one of the highest distinctions a Poultry Science Association member can achieve. The designation recognizes members for professional distinction and contributions to the field of poultry science and service to the association. A two-thirds majority vote by the board of directors is required to elect any nominee as Fellow.

The association's Maurice Stein Fellowship Award went to Dima L. White, a doctoral candidate studying under Kim. The award is given to a graduate student whose training and research in applied poultry sciences may lead to improvements in the efficiency and profitability of the egg industry.

Applegate, who joined the UGA Department of Poultry Science in 2016 as department head, grew up in a small farming community in southwestern Iowa. He earned bachelor’s and master’s degrees in animal science from Iowa State University and his doctorate from The Ohio State University. He completed postdoctoral training at the University of Maryland before joining the faculty at Purdue University, where he developed an active and collaborative research and outreach program and rose to the rank of professor.

“I am truly humbled to join the company of those I have admired in my career for their accomplishments, many of whom I’ve looked to as mentors,” Applegate said. “The Poultry Science Association is a unique scientific organization that has helped guide and develop me throughout my career, and I’ll continue to encourage my fellow members to give back to ensure the success of our next generation of poultry scientists.”

Applegate’s research areas include maximizing nutrient use and minimizing nutrient excretion into the environment and the impact of stressors, pathogens and toxins on gastrointestinal function and physiological responses.

During his career, Applegate has published 128 journal articles, 193 abstracts, 97 conference proceedings and 21 Extension publications; edited two books, and been invited to give 155 talks throughout the U.S. and in 23 additional countries. He has mentored 17 graduate students, served on an additional 40 graduate student committees and hosted 23 postdoctoral fellows and visiting scholars. He served on the Poultry Science Association's board of directors from 2006-09, on the executive board from 2012-16 and as president from 2014-15. During his career, he has been an avid reviewer for both Poultry Science and the Journal of Poultry Research.

The longest-serving faculty member in the Department of Poultry Science, Wilson has a national and international reputation in broiler breeder management. Her work on improving breeder fertility alone is estimated to have saved Georgia poultry breeders more than $6 million each year.

Wilson grew up on a beef cattle farm in Boones Mill, Virginia, and was heavily involved in 4-H as a teen, placing third nationally in the chicken barbecue contest. In 1980, she earned her bachelor’s degree with a double major in poultry science and animal science from Virginia Tech, and after studying broiler management under Bill Weaver, she earned her master's degree from Virginia Tech in 1982. Mentored by Weaver, Wilson learned a love of helping people through what would become a long career in extension. Wilson completed her doctorate with Gaynor McDaniel at Auburn University in 1987 and developed a lifelong passion for working with broiler breeders. In 1988, she joined the UGA faculty as an assistant professor and Extension specialist.

Wilson works to improve flock productivity, fertility and hatchability through field studies and applied research on feed restriction programs, hen nesting preferences, patterns of egg production, rooster mating activity, semen quality, embryo viability and egg contamination. Today's breeder houses are designed based on her recommendations, such as nest, drinker and feeder installation and slat configuration, and separate male feeders and male selection pens. Her work on breeder productivity and facility hygiene has had major ramifications for the U.S. poultry industry as it has transitioned towards rearing birds without antibiotics.

She has mentored 16 graduate students, published 84 journal articles, 165 abstracts and presented more than 270 talks across the U.S. and in more than 20 countries. Now a full professor at CAES, Wilson continues to pass along her knowledge of breeder and hatchery management to undergraduates in her "Advanced Poultry Production" class. In 2005, she was recognized with the Phibro Animal Health National Extension award and has received two of UGA’s highest awards — the 2007 Walter B. Hill Award for Excellence in Public Service and the 2008 D.W. Brooks Award for Excellence in Extension.

In addition to her research and teaching, Wilson helps organize an annual hatchery workshop, the Deep South Poultry Conference as well as other seminars to introduce new techniques for better breeder flock and incubation management. She is also an active supporter of youth programs through her work with 4-H and FFA poultry judging programs and has been an important mentor to numerous poultry science students in her research and as an advisor for the Poultry Science Club.

“I’m so thankful to have Dr. Wilson as a colleague. She well deserves recognition for all she has done to improve broiler breeder productivity and how that translates to success in the hatchery for numerous companies not only in Georgia, but nationally and internationally,” Applegate said. “Within the department, she has guided and mentored generations of poultry students, instilling in them what it takes to be successful in the poultry sector. I wish her my heartfelt congratulations on becoming a Poultry Science Association fellow.”

Kim, who joined the CAES faculty in 2013, focuses on the roles of prebiotics and probiotics, amino acids, vitamins, minerals and enzymes on growth/laying performance, nutrient digestibility of feed ingredients, feed nutrient utilization, intestinal development, gut health, immunity, and bone health in poultry. He has published 128 peer-reviewed papers, 17 proceedings and symposium papers, and 123 abstracts. He teaches subjects including feed and feeding, poultry nutrition, and vitamins in animal nutrition. Kim currently serves as a section editor for the journal Poultry Science.

“Dr. Kim has developed national and international recognition for his expertise in nutrition and nutrient use by physiological processes. Specifically, his research focuses on bone development and remodeling, as well as the use of novel and bioactive compounds in feed for improvements to nutrient and energy use by the bird, as well as toward improvements in gastrointestinal health,” said Applegate. “Both of these areas are critical areas of need for Georgia, U.S. and global poultry sectors and speak to the timeliness of the questions he is asking as well as the ready applicability of his research findings.”

In other research, Kim is drawing on his previous medical research to develop a bioactive molecule to stimulate bone formulation to prevent osteoporosis in humans. The work he does now in poultry follows a similar protocol. Bone weakness is a problem in broilers due to stress placed on the birds’ skeletal systems because they are bred for rapid mass and weight gain. Layer birds have similar issues because they are selected for high egg production and a long egg production cycle, and about half of the calcium they use to produce eggs is drawn from bones, causing osteoporosis in older laying hens.

“I am so thrilled that we have been able to attract the caliber of students like Dima to UGA poultry science. This award is distinctive to recognize the impact of a student’s work in aiding the laying hen sector,” Applegate said. “I’m excited for students like Dima that show outstanding leadership potential, which bodes well for the future of our poultry sector.”

For more information on the Poultry Science Association, visit poultryscience.org. To learn about the UGA Department of Poultry Science, go to poultry.caes.uga.edu. 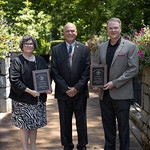