With commercial citrus acreage on the rise in Georgia, producers should be aware of potential signs of citrus greening and the pests that carry the disease that has devastated the citrus industry in Florida.

“Greening is the big gorilla in the room. It has been a bad problem in Florida since it was found there in 2005. The insect that spreads that bacteria is a tropical insect, but it has been living in Georgia coastal counties since 2009,” said Lowndes County University of Georgia Cooperative Extension Coordinator Jake Price who has helped producers with the growth of the industry in Lowndes County and surrounding areas.

Since it launched in 2013 and 2014, Georgia’s citrus industry has grown to about 2,000 acres of commercial citrus planted in southern Georgia, primarily cold-hardy satsumas, Price said.

The Asian citrus psyllid (Diaphorina citri) is the tiny pest that spreads the bacteria that causes citrus greening, a fatal vascular bacterial disease also known as huanglongbing (HLB). Originating in China, the disease was carried to Florida on infected trees. It destroys the root system first and the tree may not show foliar symptoms for up to a year.

Surveys are being done to see where else in Georgia the insects and disease can be found.

“It has not yet been found in commercial groves, but has been documented in homeowner sites along the coast and in non-commercial citrus in Lowndes County and Pierce County,” he said. “The psyllids are well-populated in coastal Georgia counties so it is probably only a matter of time before it shows up in commercial situations.”

Once the Asian citrus psyllid feeds on a citrus tree, it spreads the bacteria, which will kill the tree in five years or less. Symptoms can be slow to show above ground, meanwhile the disease can spread between trees in an orchard.

While cold climates can hamper the insects’ spread, increasingly warm winters are probably not helping the problem in Georgia, Price said. Even with temperatures below 20 degrees Fahrenheit, some citrus psyllids may survive, so growers should not depend on freezes to kill all the psyllids.

Many commercial growers are treating trees prophylactically to prevent psyllid infestation but homeowner trees and wild or abandoned citrus can continue to be sources for psyllids and citrus greening.

“We can’t dictate what people do, but we can tell homeowners what the situation is and let them know that what they have in their landscape could threaten this new industry,” Price said.

If you suspect you have a tree with citrus greening and would like it tested, contact your local UGA Extension office. Limited funds are assigned to each county for free citrus testing through a Specialty Crop Grant obtained by UGA plant pathologist Johnathon Oliver.

“If your trees are looking unhealthy, if you are on the coast of Georgia or if you bought trees from Florida, you could have greening in the tree without being aware of it. Some of the symptoms are leaves that are mottled with yellow, which some can confuse with nutrient deficiencies,” said Price.

“If a tree is already infected, we suggest that you remove the tree, roots and all. You have to remove the roots because the disease gets in the roots and the tree may re-sprout. You have to clear it out the best you can, then preferably burn it,” Price said. “That’s pretty drastic, but really it is the only way to get rid of it.”

Homeowners are not required to remove affected trees and some want to keep their trees as they are bearing fruit.

“I have heard people say they are just going to leave diseased trees for as long as they can, but I don’t recommend that they try to do that,” Price said. “Millions of dollars are being pumped into trying to control greening around the world. It is hard to tell a homeowner they need to pull up a tree, but this presents a tough situation for the industry. More than 90% of new citrus growers in Georgia know that greening is out there, but they are willing to take that chance.”

Research from the University of Florida suggests spraying commercial trees in Florida with a pesticide while trees are dormant and beneficial insect populations are low to eliminate the first generation of breeding citrus psyllids. Detailed information from UFL about citrus greening is available at http://edis.ifas.ufl.edu/pdffiles/PP/PP32600.pdf

“If you are in an area that has citrus psyllids, it is not a bad insurance policy to treat in the winter, but do not apply an insecticide if you don’t have a reason to spray,” said Price.

Sticky traps are available to place in trees or orchards to monitor for psyllids and some UGA Extension agents are using traps to monitor trees in their counties.

“If you start seeing psyllids, it is a definite concern because where you find the citrus psyllids, the disease follows,” he said.

UGA Extension offers programming on citrus for those interested in growing. More information is available by visiting site.caes.uga.edu/citrus or contacting your local UGA Extension office. 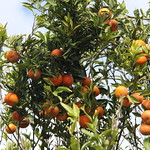