George Vellidis, professor in the department of crop and soil sciences in the University of Georgia College of Agricultural and Environmental Sciences, has been named University Professor, a title bestowed on those who have had a significant impact on the university in addition to fulfilling their normal academic responsibilities.

Vellidis’ research focuses on water resources and precision agriculture. He applies principles of engineering and the sciences to measure, model and manage the interaction between agricultural production systems and the environment. Vellidis is located at UGA’s Tifton campus, where he serves as director of academic affairs for the campus.

Fostering students to have a positive impact on Georgia has long been a goal of Vellidis. In 2001, he began conducting surveys and market research to determine if there was a demand for an undergraduate major at the Tifton campus, located 200 miles from UGA’s main campus in Athens.

His research showed that there was a significant demographic who wanted a degree from UGA but could not leave south Georgia for one reason or another. Vellidis was one of two leaders who helped establish the College of Agricultural and Environmental Sciences teaching program on the Tifton campus. Graduates of this program now populate many of the agricultural companies that provide precision agriculture and laboratory services in south Georgia. Vellidis was also one of the leaders who developed the Dual Master’s Degree in Sustainable Agriculture between UGA and the University of Padova in Italy. Eighteen graduate students have participated in this program since its inception in 2018.

“Dr. Vellidis’ career at UGA exemplifies the spirit of the University Professorship,” wrote Samuel Pardue, dean and director of the College of Agricultural and Environmental Sciences, in his nomination letter. “While at UGA, he has become an internationally recognized researcher in precision agriculture, but he has also contributed significantly to the university in many other ways.”

University Professors receive a permanent salary increase of $10,000 and a yearly academic support of $5,000. Nominations from the deans of UGA’s schools and colleges are reviewed by a committee, which makes a recommendation to the provost.

Carolyn Payton is a Public Relations Specialist in the UGA Office of the Senior Vice President for Academic Affairs and Provost. 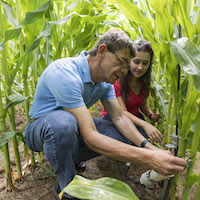