Zenglu Li, a professor in soybean breeding, genetics and genomics at the University of Georgia’s College of Agricultural and Environmental Sciences (CAES), has been named to the Georgia Seed Development Professorship in Soybean Breeding and Genetics.

Since joining UGA’s Department of Crop and Soil Sciences and Institute of Plant Breeding, Genetics and Genomics in 2012, Li has worked on the development of soybean varieties with high yield, enhanced quality, disease and pest resistance, herbicide tolerance and enhanced nutritional profile.

“This funding helps enhance our research program, as well as helping with graduate education that will further the field of breeding and genetics. This support will help the program move forward and enhance the prestige and reputation of our program nationally and internationally,” Li said.

While soybean is a small crop for the state of Georgia, it competes with corn as the top agricultural crop in the U.S., averaging 85 million acres per year. Since 2012, Li’s lab has developed 12 soybean cultivars designed for the Southeastern climate that have been released for agricultural use.

In addition to developing soybean cultivars, Li says his lab is also focused on identifying genes for disease and pest resistance and for increased yield and nutritional content to incorporate into future cultivars and in preparing future scientists and plant breeders to continue the progress in soybean breeding and genetics. The lab currently includes one postdoctoral scientist, six doctoral students, one master’s student, three undergraduate students, seven research specialists and two visiting scholars.

Prior to his current position at UGA, Li worked in the agricultural industry leading soybean discovery breeding and corn genotyping efforts for Monsanto Company and as a research scientist for DuPont Pioneer. He completed a postdoctoral fellowship in Soybean Molecular Breeding in the UGA Department of Crop and Soil Sciences in 2000 after earning his doctoral degree in plant breeding and genetics at the University of Illinois at Urbana-Champaign.

GSD is a nonprofit, self-supporting organization that provides economic support for the development of new varieties which provides business opportunities that help keep agriculture as Georgia’s number one industry. It was created in 1959 by the Georgia General Assembly to lead development of commercial plant materials in the state by promoting varieties developed and released by UGA researchers and was designated as a public, nonprofit corporation by the Georgia Legislature in 2008, allowing the organization to expand its scope. 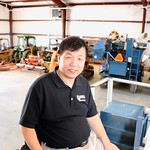