William "Bill" Branch, a professor in the Department of Crop and Soil Sciences and a peanut breeder with the University of Georgia, has been named to the Georgia Seed Development Professorship in Peanut Breeding and Genetics.

Since joining the College of Agricultural and Environmental Sciences in 1978, Branch has worked to develop new peanut varieties to help with the battle against Tomato Spotted Wilt Virus (TSWV), a disease that was ravaging peanut fields across the Southeast.

Since the beginning of his career at UGA, Branch has developed more than 20 new peanut varieties with the consistent goal of increased yield and grade as well as resistance characteristics for the farmer, and better shelling characteristics and enhanced flavor and nutrition for the consumer.

Early in the fight against TSWV, Branch developed the Georgia Green variety, a cross between Southern Runner and Sunbelt Runner, that helped set the peanut industry back on track. To improve upon Georgia Green, Branch released Georgia-06G, which is the predominant variety grown in Georgia today.

“Peanut breeding is a long-term program that takes a lot of patience,” Branch said. “Today, we have genetic markers available to assist with peanut breeding and help speed up the process. These tools help breeders make selections based on disease resistance for new varieties.”

Branch encourages the next generation to look for career opportunities in peanut breeding. “This is exactly what I wanted to do,” he said. “Individuals need to view peanut breeding as a long-term career and have patience when developing the next variety.”

Branch can be found in his greenhouse crossing a future line or out in the field, tracking each variety’s growth and watching for potential issues. His ultimate goal is to help peanut farmers make a profit by providing an increased yield and grade variety leading to a higher dollar value per acre while satisfying industry and consumer demands.

GSD is a nonprofit, self-supporting organization that provides economic support for the development of new varieties which provides new business opportunities that help keep agriculture as Georgia’s number one industry. It was created in 1959 by the Georgia General Assembly to lead the development of commercial plant materials in the state by promoting varieties developed and released by UGA researchers and was designated as a public, nonprofit corporation by the Georgia Legislature in 2008, allowing the organization to expand its scope. 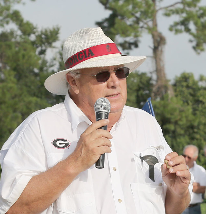