By Michele Hatcher for CAES News

“Save the Honeybee” license plates are now available for Georgia drivers to purchase, thanks to the efforts of the Georgia Beekeepers Association (GBA).

“The idea of the honey bee tag had been tossed around for over a decade among members of the Georgia Beekeepers Association, but due to the cost and amount of work it would require, the idea was tabled numerous times,” said Jennifer Berry, an apiculture research professional and lab manager for the University of Georgia Honeybee Program.

Finally, a group of enthusiastic members of the GBA decided it was time for Georgia to have a tag dedicated to the “beloved honeybee,” Berry said. That was when the real work began, as getting a new license plate in Georgia requires legislative action, which can take years.

A couple of GBA members quickly learned the ins and outs of getting a license tag issued, including learning legal and legislative processes and understanding laws and procedures. Then the GBA board had to commit to cover the $25,000 specialty-tag manufacturing fee, a new state requirement due to dozens of specialty tags not selling well. It was a gamble, but the GBA rolled the dice.

The breakeven point for the GBA is selling 1,000 tags and this must be done within two years. Only then will the group be reimbursed the $25,000 ($25/tag). Once 1,000 tags are sold, the GBA receives $22 per tag sold. The tags became available for purchase in June 2019 and to date 820 tags have been sold. Unexpectedly, 71% of the tags sold so far were not purchased by GBA members.

“This is amazing and, due to the diligence and hard work of so many folks, social media and the marketing campaign, that is still going on today,” Berry said.

“Another cool tidbit is that no one had ever gotten a license tag bill passed through the state legislature as fast as the GBA did,” Berry said. The first meeting with the Georgia Department of Revenue administration was on Nov. 17, 2017. The House approved the request on Feb. 1, 2018, the Senate approved it on March 21, 2018, and the Governor signed it into law on May 3, 2018.

According to the new law, funds raised by the sale of this special license plate “shall be dispersed to the GBA and used to increase public awareness of the importance of the conservation of the honey bee. Funds are to be used to support association programs, including but not limited to the training and education of both new and experienced beekeepers, prison beekeeper programs, grants to beekeeping-related nonprofit corporations, beekeeping research facilities in this state and projects that encourage public support for the license plate and the activities it funds.”

To purchase a honeybee tag, go to the GBA website at gabeekeeping.com and click the link for the “Save The Honey Bee” license plate.

Michele Hatcher is the editor of the Hexapod Herald, the newsletter of the University of Georgia Department of Entomology.
Authors:
Michele Hatcher
Experts/Sources:
Jennifer A Berry 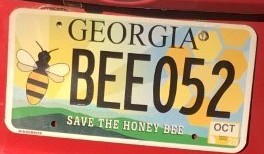 CAES News
Pumpkin carving gone green Posted on 10/26/21 by Leslie Matos
Every year after the autumn holidays, more than 1 billion pounds of pumpkins are thrown away. National Pumpkin Day, Oct. 26, kicks off a week of multiplying cucurbit decor, so celebrate this year by learning how to dispose of your pumpkins in a more sustainable way.
Subscribe for Updates