A team of agricultural scientists across the Southeast are using a $1.8 million U.S. Department of Agriculture (USDA) Agricultural Research Service (ARS) grant to study the impact of aphids in sorghum crops.

Michael Toews, an entomologist with the University of Georgia College of Agricultural and Environmental Sciences, is among the scientists on the five-year project, which is a collaborative effort among multiple institutions throughout the Southeastern Coastal Plain region including UGA, USDA ARS, Fort Valley State University, Auburn University, Clemson University, North Carolina University and the University of Florida.

According to Toews, multiple scientists are needed to work on the problem because the sugarcane aphid is a difficult pest to manage on sorghum in the Southern U.S.

“We frequently collaborate with scientists across the region and across disciplines to solve particularly vexing problems and this is one where we need the expertise of lots of people,” said Toews. “Grant support enables us to put in a tremendous effort in a short period of time across the region, the Southeastern states, and with a really intense focus that enables us to make a lot of progress synergistically.”

Researchers who are part of the grant will examine insecticide seed treatments, proper timing of insecticide applications, host plant resistance, and biological controls including predators and entomopathogens, which is a group of naturally-occurring fungi that kill aphids.

These tests will provide growers with short-term solutions, thus allowing farmers to produce a crop. However, Toews hopes the project will result in a more permanent solution to the problems presented by aphids.

“In the long term, we need to breed for resistance to this insect so the sorghum plant can withstand the attack from a genetic standpoint,” Toews said.

Georgia farmers planted 55,000 acres of grain sorghum in 2014, prior to aphids being discovered in the state. That acreage decreased drastically in subsequent years.

“By 2016, Georgia growers only planted 20,000 acres of grain sorghum because the sugarcane aphid was such a devastating pest that cut into profits and the ability to produce a crop,” Toews said.

Researchers are also using the grant to study planting dates to determine if planting sorghum earlier or later in the summer will reduce damage caused by sugarcane aphids.

The project includes all four types of sorghum grown in Georgia — grain sorghum, forage and silage sorghum, and sweet sorghum.

“In the short term, by participating in the UGA Statewide Variety Testing program, we are trying to help farmers identify the best available commercial hybrids for grain, forage and silage sorghum to plant in the coming year, so that the aphids don’t cause serious losses,” said Xinzhi Ni, a USDA ARS entomologist.

A portion of the grant money also allows Toews to hire and train future scientists.

“This is a great example of how we utilize federal dollars to not only solve problems but also train the next generation of agricultural scientists,” said Toews. “That’s an important part of what we do here at the University of Georgia.”

To learn more about what scientists in the UGA Department of Entomology are researching, visit ent.uga.edu. 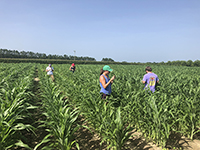