A plant pathologist at the University of Georgia Tifton campus is using a grant from the Georgia Farm Bureau to study a bacterial disease that is harming the state’s blueberry crops.

Jonathan Oliver, an assistant professor in the Department of Plant Pathology in the College of Agricultural and Environmental Sciences at UGA-Tifton, says the $7,000 grant will fund his studies of a new strain of the bacterial pathogen Xylella fastidiosa. While this grant supports blueberry research, the pathogen can also affect other crops such as grapes, peaches and pecans, as well as oak and elm trees.

The pathogen clogs the xylem, or the conductive tissue of the plant, which is essential for water and nutrient transport. As a result, the infected crop will often show symptoms like leaf scorching or drying, which can be mistaken for drought damage.

Since Xylella is a leading cause of plant death in southern highbush blueberries in Georgia, it is important for Oliver to study the pathogen to help prevent crop loss. The known strain of Xylella affects yields and fruit quality, which impacts profits.

Oliver says his study of bacterial leaf scorch on blueberries led to his discovery of this new strain of the pathogen.

“We were doing genetic work on the pathogen to understand how the pathogen within our blueberry fields relates to the pathogen elsewhere,” he said. “It was through this work that we realized that we had identified a new strain of Xylella that had never been seen on blueberries before.”

As a result of this finding, he wanted to make sure that this new strain wouldn’t have more of a detrimental effect on the crop than the known strain.

“As bacteria recombine with one another, it can lead to new strains that have different properties entirely,” he said. “Xylella is known for exchanging genetic information, which can ultimately lead to more potent strains. We were concerned that this new strain might be able to go to different hosts, or different varieties of blueberries specifically, and possibly cause more severe symptoms.”

The grant, which also funds lab-based DNA testing, allows Oliver and other researchers to assess how widespread the new strain of Xylella is, how severe it is in comparison to the known strain, and how to determine management options. Tests are being performed in greenhouses to demonstrate how likely the pathogen is to infect different blueberry varieties.

Oliver appreciates Georgia Farm Bureau for supplying the grant and providing him with the opportunity to study the pathogen, so that the problem doesn’t continue to worsen.

“We hope through the relatively small studies we’ve been able to do on this pathogen (because of the grant), we can better understand the threats to blueberry production in the Southeast,” he said.

To read more about research being conducted in UGA’s Department of Plant Pathology visit, plantpath.caes.uga.edu. 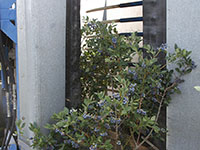