The CAES Alumni Association presented the 2019 awards at the 65th  University of Georgia College of Agricultural and Environmental Sciences (CAES) Alumni Association Awards banquet on Oct. 4 at the Classic Center in downtown Athens, Georgia.

"The awards banquet was an extremely special celebration as we recognized two men who changed the face of agriculture in Georgia. We acknowledged several alumni who have achieved greatness in their professions and their service to others, and applauded numerous students who received scholarships from the association," said CAES Alumni Association President Brent Marable. "The night was an accumulation of salutes, all in recognition of many individuals who have contributed mightily to our state's number one industry and to our college we so dearly love. "

The banquet was headlined by the induction of two new members into the Georgia Agricultural Hall of Fame.

Bill Brim, a Tift County farmer and strong advocate for Georgia agriculture, and Foster Rhodes, who was instrumental in establishing the Georgia National Fairgrounds and Agricenter in Perry, Georgia, are the newest inductees into the Hall of Fame. Readers can learn more information about Brim and Rhodes's accomplishments at www.caes.uga.edu/alumni/recognitions/georgia-ag-hall-of-fame/portrait-gallery.

This year's Alumni Awards of Excellence were presented to four CAES alumni who have achieved excellence in their chosen fields or their communities. This year's winners are:

Charlie Broussard, BSA 1978, MS 1980, national account manager of Merck Animal Health, launched his storied career in the poultry industry after receiving his bachelor’s and master’s degrees in poultry science from CAES and his Master of Avian Medicine and Doctor of Veterinary Medicine from the UGA College of Veterinary Medicine. He's spent his career ensuring the health and safety of the international poultry supply as an animal health expert with Gold Kist, with Fakeiah Poultry in Saudi Arabia and now with Merck.

Broussard is a member of the American College of Veterinarians and the American Association of Avian Pathologists. He serves on the UGA Board of Visitors and as a mentor for the UGA mentor program.

Jaime Hinsdale Foster, BSA 1999, owner and founder of Georgia Grinders Premium Nut Butters, gave up her corporate career in 2012 to launch Georgia Grinders, the first manufacturer of premium nut butters in Georgia. Since its humble beginnings, Georgia Grinders has grown from selling in regional farmers' markets to becoming a national brand. They refined the production process and enlarged their manufacturing facility in Chamblee, Georgia, from 1,000 square feet to 6,000 square feet to expand their portfolio of simple nut butters. Among her many accomplishments, Foster has been named a 2019 UGA Alumni Association Bulldog 100 honoree, which recognizes the 100 fastest-growing businesses owned or operated by UGA alumni.

Ken Foster, MS 1986, president’s fellow and professor in the department of agricultural economics at Purdue University, has positively impacted students, agricultural producers and industry leaders alike. A former department head of Purdue University’s Department of Agricultural Economics, Foster is a noted agricultural production economist who studies the structure of agricultural marketing systems. His work has made him a sought-after expert on the changing nature of agricultural markets and how farmers around the world can adapt to those changes. He recently coedited “How to Feed the World,” a book that takes an “accessible but wide-ranging look at the modern food system” and what it will take to double food production by 2050.

Andrea B. Simao, BSA 1990, assistant deputy administrator for the USDA Plant Protection and Quarantine program's Phytosanitary Issues Management unit, has used her training from the UGA CAES Department of Horticulture to expand markets for American agricultural products across the globe. Simao’s leadership within the USDA has been highlighted by several prestigious honors. In 2013, she was selected to serve in a position with the President’s Management Council Interagency Rotation Program. In this position, she worked in the Department of Transportation and cocreated a multibillion-dollar grant management training program required by the Office of Management and Budget. She also received an award and national recognition from the National Plant Board for outstanding partnership and collaboration.

The alumni association also honored three young alumni with its CAES Young Alumni Achievement Awards. These awards recognize CAES alumni under 40 who have achieved excellence in their chosen fields or their communities. The 2019 award winners are:

Sara Dunn, BSA 2005, vice president of operations and electronic banking for Oconee State Bank, is committed to giving back to her community through her career in banking and through volunteer service. Since graduating from UGA with a bachelor’s degree in agribusiness, Dunn has remained near her hometown of Athens to build her banking career at Oconee State Bank. She is a vital part of the civic life of Oconee County, volunteering with numerous leadership and youth development organizations.

She can also be found at The Pastures of Rose Creek, where she shares her talents with fellow CAES alum and farm owner, William Powers. Assisting with anything from tax preparation to egg sorting and packaging to managing the farm’s social media presence, Dunn uses her CAES education to help promote the farm.

Tamlin Hall, BSA 2002, owner at The House ATL, founder of IAMHOLDENON Inc., and curriculum consultant for the Board of Regents of the University System of Georgia, is an award-winning director and advocate for mental health awareness. Hall graduated with a bachelor’s degree in agricultural and applied economics but followed his passion for filmmaking to California where he earned a Master of Fine Arts degree from the University of California, Los Angeles. He has translated his roots in rural Georgia and his film making experience to produce Holden On, a film that helped spark a wider conversation about mental health and rural America. He recently began a part-time screenwriting faculty position at UGA's Grady College of Journalism and Mass Communication.

Franklin West, PhD 2008, an associate professor in the UGA CAES Department of Animal and Dairy Science, is a global expert in stem cell biology, with a focus on stem cell reprogramming and stem cell therapies for neural injury and diseases including stroke and traumatic brain injury. He is also an international leader in the study of stem cells and brain science. West has distinguished himself as a teacher and mentor, guiding undergraduates and graduate students across the Department of Animal and Dairy Science and CAES. Because of West's effective mentorship and teaching, CAES students are racing toward success in the animal and dairy science field.

For more information about the CAES Alumni Association, visit www.caes.uga.edu/alumni. 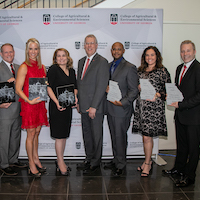