A research team from the University of Georgia’s Regenerative Bioscience Center has found that a compound molecule used for drug delivery of insulin could be used to treat glioblastoma, an aggressive, usually fatal form of brain cancer.

Glioblastoma, also known as GBM, is a fast-growing, web-like tumor that arises from supportive tissue around the brain and resists surgical treatment. Described by some as “sand in grass,” GBM cells are hard to remove and tend to reach out in a tentacle-like fashion through surrounding healthy brain tissue.

According to the National Foundation for Cancer Research, more than half of newly diagnosed GBM patients die within the first 15 months. Late U.S. Sens. John McCain and Ted Kennedy both died from GBM, raising national awareness of the deadly disease.

Surfen, a compound molecule first described in 1938, is a pharmaceutical agent used to optimize insulin delivery. The UGA researchers identified that surfen-treated cells were “blocked” from tumor growth, and the spread of tumor cells in the brain.

“This study shows that we can stifle the growth of invasive brain tumors with a compound that has a substantial clinical advantage, and can aid in the reduction or refinement of mainstream treatments, particularly radiation and/or chemo,” said Lohitash Karumbaiah, associate professor of regenerative medicine in UGA’s College of Agricultural and Environmental Sciences.

Published ahead of print in the FASEB Journal, the study is the first known use of surfen as an application to treat GBM. To test the approach, the research team first used cultured cells to observe binding properties of the surfen compound. Next, they introduced live rodent models with cells that could grow into invasive tumors. The researchers found that surfen-treated animals demonstrated smaller tumors and substantially reduced brain hemorrhage volume than control animals.

“In basic terms, surfen is highly positively charged and will bind to negatively charged things,” said Meghan Logun, a graduate student working with Karumbaiah. “Since we study sugars in the brain, which are highly negatively charged, we then asked, ‘Why not try using positive charges to block off the negative ones?’”

Logun is studying how brain cancer takes advantage of highly charged elements in brain tissue to aid in invasion. “In the surfen-treated animals, we saw that the tumors were actually much more constrained and had more defined boundaries,” she said.

To explore the surfen molecule further, the team worked with Leidong Mao, associate professor in UGA’s College of Engineering and co-developer of a microfluidic device used to examine glycosaminoglycans (GAGs)—highly negatively charged molecules produced by brain tumors. Designed to mimic the neural pathways of the brain, the device allows for real-time monitoring of tumor cell adhesion and growth.

“We did not expect to see such a robust response,” Mao said. “Blocking off the charged GAGs from the tumor cells really did dampen their ability to invade.”

Based on the study’s discovery that surfen had isolated the tumor, the team also analyzed MRI images to gauge the treatment’s effectiveness.

“In the MRI image you can see [the effects of the surfen treatment] pretty drastically, not in terms of killing the GBM but in blocking its prey,” said Qun Zhao, associate professor of physics in the UGA Franklin College of Arts and Sciences and another RBC collaborator on the project. “In the non-treated image, you see rampant invasive growth, compared to the surfen-models where you see a nicely contained and almost circular-shaped tumor.”

“The tumor may still grow, but at least now it doesn’t have any invasive inroads to creep into other parts of the brain,” said Karumbaiah. “That could be clinically beneficial for a surgeon wanting to remove the tumor and not having to worry about rogue cancer cells.”

Looking ahead, Karumbaiah is hopeful that repurposing a compound known to be safe, with proven and beneficial binding properties, could help accelerate review and approval of this potential new therapeutic, and advance consideration in helping to expedite the drug approval process.

“Our hope is that, in the wake of this discovery, lives can be saved, and we can finally change the scope of this life-threatening disease,” said Karumbaiah. “In my five years at UGA, this is the highest profile cancer paper I’ve ever had.”

This study was funded by the National Institutes of Health and UGA’s Clinical and Translational Research Unit. The Regenerative Bioscience Center is a unit of the UGA Office of Research, with generous support from the College of Agriculture and Environmental Sciences and its Department of Animal and Dairy Science. 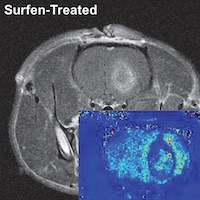