Richard Oteng-Frimpong, a groundnut breeder with CSIR-Savanna Agricultural Research Institute in Northern Ghana has a brother, who is in the military. The solider brother bragged last year that the region where he was stationed has the best tasting groundnut in all of Ghana, a variety called “Chinese” that is popular throughout the country.

Understandably curious, Oteng-Frimpong was more interested in testing the nuts, rather than tasting them. He asked for a sample and received two, one grown in 2017 and one in 2018. He found that the two samples of groundnut – which the local farmer thought were the same variety – shared only 45% similarity.

“People tend to say, I am growing Chinese, but they are just looking at the seed coat color and the plant architecture. They don’t know. So, we have to be very careful in what we call Chinese,” Oteng-Frimpong said.

Groundnut breeders across Africa have wondered at the differences they’d see in nuts that were called the same name but didn’t look alike.

Last year, a group of breeders from across the continent put together hundreds of lines of peanuts and, under the auspices of the Peanut Innovation Lab headquartered at the University of Georgia, found out just how similar or different their peanut lines are.

Project leaders began by presenting on the work to map the peanut genome (which was completed in 2017) and the Arachis array (which contains 58,000 unique SNPs), as well as reviewing resources available on Peanut Base, a database of peanut genotypic and phenotypic data. Single nucleotide polymorphisms (SNPs) are differences that can be detected between the genomes of two individuals using modern molecular technology. Arrays that contain thousands of such SNPs are an effective and inexpensive way to determine how similar or different two varieties really are.

Peggy Ozias-Akins, project principle investigator, Josh Clevenger and Jean-Francois Rami, project researchers, taught the group how to use various analysis software required to analyze and display SNP data from the lines they submitted to the project. Later, the breeders reviewed the information from the different genotypes and analyzed the diversity and relatedness of their materials.

In a break from indoor work the researchers also visited the Niroro research station near Thies, where technicians were growing the various peanut lines to increase seed. “Everything that was genotyped came from a single plant, so we needed a seed increase to have enough seed for the next experiments,” Ozias-Akins explained. Once sufficient seed is available, all breeders will receive seed from all lines submitted for genotyping.

The SNP genotyping is actually the first step of a much larger pair of Peanut Innovation Lab projects led by the national breeders in Senegal and Uganda. This larger project aims to assemble a reference set of lines representing the diversity of peanut across Africa. These lines will then be evaluated in numerous field trials across Africa to identify lines containing genes for traits of interest by the breeders.

At the workshop, each breeder identified a core set of lines – 200, 250 or 300 lines – depending on how many they felt they could analyze.

“It is a lot of work to grow and evaluate lines in a replicated trial in order to get reliable phenotyping data,” Ozias Akins said. “But everyone on the team has a sense of excitement about the project. Everyone worked very well together to come up with the list to attain the objective of sampling all the diversity.”

By the end of the workshop, the breeders received all of the SNP data, had the analysis software installed on their laptops, were trained in how to access and analyze the data for use in their future research efforts, and had identified the set of lines for further field trials across Africa. In addition, all of the SNP data was submitted to Peanut Base, making it publicly available to anyone interested in peanut diversity.

Allison Floyd is the PR coordinator for the Feed the Future Innovation Lab for Peanut, which is headquartered at UGA.
Authors:
Allison Floyd
Experts/Sources:
Peggy Ozias-Akins
Dave Hoisington 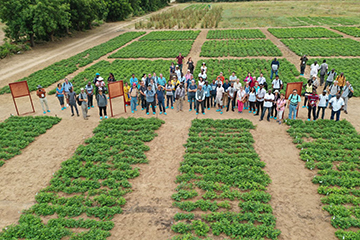 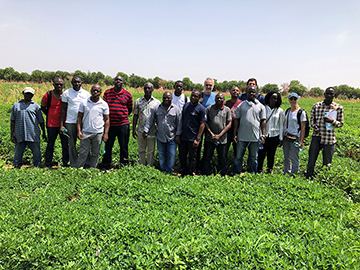