Walking through his peach orchard, a farmer notices something he has not seen before on the leaves of a few trees. He quickly pulls out his cell phone and accesses the MyIPM smartphone app.

The app was first developed by plant pathologists at Clemson University to give growers a “one-stop shop” to access all of the resources they might need for disease management, says Brett Blaauw, an assistant professor and peach specialist with the University of Georgia Department of Entomology. A couple of years later, two more apps were created: one focused on insect pests and another geared specifically for the Northeastern region of the U.S.

“When I came to UGA, I worked on merging the three separate apps into one master app, which included new tools, crops and functionality,” Blaauw said. “The single MyIPM app currently has nine crops with disease diagnostic tools and six crops for insect diagnostic tools.”

To date, the app has been downloaded more than 2,100 times. Designed to promote integrated pest management in commercial fruit crop production, one of Blaauw’s favorite aspects of the app is that it’s full of useful information for users of both Apple iOS and Android mobile operating systems.

“Not only is there a large list of chemistries that are labeled for each disease or insect pest, but users also have the ability to view high-resolution pictures to identify symptoms and signs of disease and insect injury,” he said. “With that said, my real favorite aspect is that the app is free.”

The app is continually being updated by leading Extension specialists at seven land-grant universities and the Southern IPM Center.

Feedback from users has been overwhelmingly positive. Of the users surveyed, 65% say that the app has helped them manage pests and 70% say that it has increased their knowledge of pests and IPM, according to Blaauw.

“Nearly everyone I talk to about the app is pleased with its functionality and ease of use,” he said.

The app has been downloaded to more than 70 different countries, including India, Mexico and Canada.

Blaauw is currently working on adding a section on beneficial insects to help growers identify “good bugs” using the app. He hopes to see the app expanded to include more crops.

For more information on the MyIPM app, visit https://apps.bugwood.org/apps/myipmseries/.

Michele Hatcher is the editor of the Hexapod Herald, the newsletter of the University of Georgia Department of Entomology. 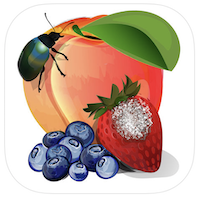