Rain, overwatering can cause slippery algae to pop up in turfgrass lawns

Recent dry weather encouraged the use, and possible overuse, of irrigation systems. Followed by tropical conditions characterized by heavy rainfall and humidity, there have been reports of a jelly-like substance growing in turf.

The jelly-like matter is Nostoc, a genus of cyanobacterium formerly classified as blue-green algae. The algae — commonly known as star jelly and witch’s butter, among other names — may appear suddenly in lawns and other turf areas in warm temperatures following a period of rain, and the algae can also be an indication of overwatering.

In turf, Nostoc generally emerges on a site where the grass is growing poorly due to severe compaction, overwatering or both. It does not cause the turf to decline or die, but it does colonize areas where it has favorable growing conditions and the grass was already thin.

Poor drainage and compacted soils create a favorable environment for Nostoc. It dries out when moisture or rainfall diminishes, but it has only gone into dormancy. With enough moisture, it will come back to “life.”

In its hydrated, gelatinous, green state, it can be a safety hazard because it’s slippery — so be careful walking on it.

However, when it dries out, it can restrict turfgrass growth. Nostoc dries into a black crust that can prevent stolons from rooting, or “tacking,” into the soil. This delays the growth and spread of turfgrass.

Nostoc can be difficult to control. To discourage its growth, encourage the growth of the grass. Algae is less of an issue with an actively growing turfgrass canopy.

The first step is to check the irrigation system to make sure it is watering properly (i.e., not too often or too much). The turfgrass species grown in Georgia perform better when grown on the slightly dry side, so scaling back irrigation and adjusting the irrigation schedule will benefit the grass and can discourage algae.

The second step is to improve the internal soil and surface drainage. Core aeration opens the soil, allows oxygen into the root system and reduces compaction.

Allow the soil surface to dry out, then break up the Nostoc “crust” by cutting the upper ¼- to ½-inch. Breaking the algae into pieces will encourage it to spread. This also permits the turfgrass stolons to root into thin areas and outcompete the Nostoc.

With proper irrigation and core aerification, the grass can cover, and eventually predominate, the area where the Nostoc was present.

For more information about turfgrass in Georgia, go to www.GeorgiaTurf.com.

Clint Waltz is a Cooperative Extension turf specialist with the University of Georgia College of Agricultural and Environmental Sciences. 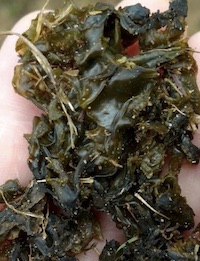