Using horticultural oil sprays as an integrated pest management (IPM) strategy to control San Jose scale in peach trees can be an effective alternative to chemical applications, and University of Georgia researchers have found that the best control comes after trees have been pruned, allowing for lower application rates than previously recommended.

San Jose scale is a sucking insect pest which damages fruit and can eventually kill a tree by injecting toxins.

Working under a Southern Sustainable Agriculture Research and Education (SSARE) On-Farm Research Grant, UGA entomologist Brett Blaauw applied a 1.5% horticultural oil solution at three different volumes — 100 gallons per acre, 200 gallons per acre and 400 gallons per acre — to peach trees both at pre-pruning and post-pruning stages to determine how well the oil covered the trees to manage San Jose scale.

Horticultural oil is also referred to as “dormant oil” due to the timing of the application. The oil suffocates insect eggs or overwintering adult insects. The better the coverage, the more effective the product.

“The purpose of the study was to determine the best application and timing rates to help growers not only better manage San Jose scale, but also to save time and money in terms of application,” said Blaauw, an assistant professor in UGA's College of Agricultural and Environmental Sciences.

In the study, “Scale Management to Promote Sustainable Southeastern Peach Production,” the researchers collaborated with two Georgia commercial peach growers to evaluate the ideal amount of coverage of horticultural oil between pre-pruned trees and post-pruned trees. They also monitored the abundance and activity of San Jose scale on a weekly basis until harvest.

Overall, they found that applying horticultural oil at 100 gallons per acre to post-pruned trees (which is done to elicit fruit production) significantly reduced the number of San Jose scale pests compared to applying oil to pre-pruned trees.

“The application of 100 gallons per acre of 1.5% horticultural oil to pre-pruned trees had the lowest percent coverage, which in turn, also had the highest abundance of San Jose scale,” said Blaauw who has a joint appointment with Clemson University.

The important takeaway from the study, said Blaauw, was that 100 gallons per acre of horticultural oil applied to post-pruned trees appears to be sufficient in providing ample coverage to manage San Jose scale.

“On the other hand, if the oil sprays are applied prior to pruning, volumes nearing 200 gallons per acre are needed to sufficiently cover the trees and effectively manage San Jose scale. Applying volumes upward of 400 gallons per acre does not seem to significantly improve management of San Jose scale and is, thus, not recommended in the Southeast.”

Prior to study results, the standard recommendation for San Jose scale management in Southeastern peach production was 200 gallons per acre of 1.5% horticultural oil solution in the delayed-dormant period of growth.

The researchers also found that applying horticultural oil did not impact natural enemy populations. They collected parasitoids, which made up the bulk of the beneficial predators identified, in addition to minute pirate bugs, long-legged flies, spiders and lady beetles. 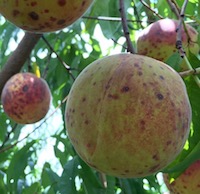 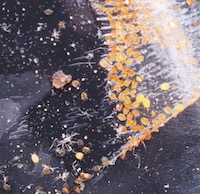