Bob Westerfield has grown a vegetable garden at home for the past 30 years, and every workday he helps Georgians do the same. As the University of Georgia Cooperative Extension consumer horticulturist, Westerfield grows vegetables to document successes, watch for problems to learn how to solve them, and share this knowledge through classes and UGA publications.

Over the years, Westerfield has compiled a lot of tricks of the trade to share with both novice and advanced gardeners. First and foremost, he says to start with the best soil possible.

“Vegetables are like speed demons or racehorses; they are in the ground for just three months before you start harvesting, so you have to get the pH of your soil adjusted before you plant,” he said.

Home gardeners can get their soil tested through their local UGA Extension office for a nominal fee. The test will reveal which, if any, nutrients need to be added.

Once the plants begin to grow, problems like insects and diseases may occur. To help identify the cause of the problem, Westerfield shares a few identification tips.

If the plant’s mature foliage at the base of the plant begins to turn yellow, there is likely a nitrogen problem or too much water is being applied. If the plant yellows from the top down, the problem is probably an iron issue.

Purple streaks on corn or mottled leaves on tomatoes are signs of a phosphorus deficiency. When the outer edges of the leaves turn yellow and then brown, it is possible there’s a potassium deficiency.

If a tomato plant is stressed, its leaves may fold up. This can be a sign of tomato leaf roll, but most plants will grow out of it, he said.

When the end of the tomato fruit begins to rot, a lack of calcium has likely caused blossom end rot, a common issue with homegrown tomatoes. Tomatoes that ripen “blotchy” and cause the fruit to have a thick core in the middle were probably improperly irrigated, he said. If the fruit cracks, the tomato plant has received too much moisture.

Just like humans, the fruit of vegetable plants can be burned by the sun. Sunscald happens most often on tomatoes and peppers but can happen to any vegetable.

“Take care to tuck vegetables underneath their natural foliage and avoid exposing them to direct sunlight,” Westerfield said. “It looks like a big burnt spot or a big brown bruise.”

Herbicide damage can also be an issue in vegetable gardens. If the upper foliage appears white or curled and distorted, it could possibly be from herbicide damage.

If it looks like something has dined on all of your plants, you may have experienced what Westerfield calls “browsing disorder.”

“Put some chicken wire around your garden to keep the rabbits and other small mammals like chipmunks from dining on your produce before you can,” he said.

When it comes to insect pest problems in a vegetable garden, Westerfield says leaf-footed bugs are the most difficult to control. The immature stage of the bug is bright orange.

“Frank Hancock, the UGA Extension agent in Henry County, tried to copy a commercial idea and used a car vacuum to suck up leaf-footed bugs from their community garden,” Westerfield said. “He vacuumed up 150 in just one day.”

When it comes to growing squash, squash vine borers are a gardener’s worst enemy, he said.

This insect problem starts when an adult moth lays its eggs in the stem of squash plants.

“You’ll know you have them. One day your squash plant looks fine and the next it looks like someone deflated it,” he said.

Westerfield’s method of controlling these pests is to plant enough squash to share with the bugs.

Keep planting more squash every few weeks throughout the season; some for you and some for the borers, he said.

Squash lovers can also take some insect pressure off of their yellow squash by planting blue Hubbard squash, a variety that can withstand squash bugs.

This method is called trap cropping. Traps crops are crops planted to attract insect pests away from the primary crop. Other good trap crops to try are sorghum and sunflowers.

“They are decoy plants that bring the bad bugs to them,” Westerfield said.

Insects like big, mature fruit, so to help control insects, Westerfield says to harvest fruit frequently and when it is small. This also encourages the plant to produce more fruit.

Nematodes are tiny worms that cause galls, or bumps, on plant roots. To help fight them in a vegetable garden, rotate families of vegetables to a new location each year. Never plant tomatoes, squash or other vegetables in the exact same spot year after year.

When it comes to preventing disease problems in a vegetable garden, Westerfield says to always water plants from below, not overhead. Drip irrigation is probably the best method of watering vegetables, as it keeps the foliage dry and conserves moisture.

Westerfield says there are simple visual cues home gardeners can use to determine whether they are fighting a disease or an insect.

Insects usually leave holes in leaves or remove a piece of a leaf, while diseases change the color of the leaves and often have a bull's-eye pattern, he says. 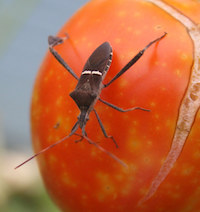