Most Americans buy food knowing that they will likely throw some of it away. And, as incomes rise, so does the amount of food that’s wasted. These are just a few of the findings revealed by a food waste study conducted by University of Georgia economists in the College of Agricultural and Environmental Sciences.

According to the U.S. Department of Agriculture, about one-third of the food supply in the U.S. goes unconsumed; two-thirds of that amount is wasted by households, while the remaining one-third is wasted at the processing, shipping and retail levels.

“Many households implicitly view food waste as a necessary process of meal preparation, partly to deal with uncertainties,” said Travis Smith, a CAES agricultural economist who studied the topic with his UGA colleague Craig Landry. “Not knowing whether you’ll have time to prepare a meal or whether you’ll be in the mood to eat a particular dish are sources of this uncertainty.”

In “Demand for Household Food Waste” published in the March issue of Applied Economic Perspectives and Policy, Smith and Landry also found that higher-income households waste more food than lower-income households, and fresh fruits and vegetables are wasted most often.

“Food waste is actually a luxury — as income rises, the (amount of) food waste rises even faster. A 1% increase in income is associated with an additional 1.3% in waste of food purchased at grocery stores,” he said.

“Families with a new infant and those with two or more children aged 5 to 12 waste more food,” Smith said. “We also found geographic differences … Our results suggest that the Western states waste the least amount of food, with states in the Southeast and Northeast along the Appalachian Mountains wasting the most.”

The study also showed that less food is wasted in urban areas. “We found that urban areas tend to (waste less food), which may be a product of food access,” Smith said.

Which foods make the “most wasted” list? Household food waste most often includes spoiled meats, fruits and vegetables; prepared foods and ingredients that have expired; and unconsumed leftovers.

“To help reduce food waste across the world, many countries, including the United States, have adopted the United Nations Sustainable Development Goal that aims to halve food waste at all points in the supply chain,” Smith said. “As such, policy makers have recognized the subsequent calls to action, spurring many local politicians and managers to seek policy prescriptions, with a particular focus on households.

Americans could be encouraged to reduce the amount of food they waste through policies and subsequent fines by individual municipalities, Smith said. For example, city ordinances could require households to sort food waste.

Taxing food inputs has been explored but would most likely lead to increases in food insecurity, he said. Seattle and San Francisco have moved towards mandatory sorting of food scraps and compostable paper.

“This would be labor intensive, but it would reduce the amount of food anaerobically rotting in landfills,” Smith said. “Policies like this could result in better meal planning to avoid the time costs associated with sorting the food, or they could result in people eating less fruits and vegetables, food inputs that are associated with greater levels of food waste.”

“Some households may find these tasks overly burdensome and too time consuming to use these diversion and prevention methods,” Smith said.

To reduce the amount of food wasted, consumers could be taught how to shop more frequently to avoid food loss, how to compost food scraps, and how to reuse potentially edible portions of food like broccoli stalks in soups. Allocation of time (e.g., how often to shop) and use of food inputs and food scraps, however, are individual choices for which some households may reject suggestions or manipulations.

The UGA economists used data from the 1977-78 Nationwide Food Consumption Survey. This was the last time the USDA collected data at the national level on both how much food households purchase and how much they eat.

“Preference literature demonstrates that households, by and large, feel guilty about wasting food, but also feel that some level of food waste within the household is simply unavoidable and a necessary part of meal production and food management,” Smith said.

Sharon Dowdy is a news editor with the University of Georgia College of Agricultural and Environmental Sciences.
Authors:
Sharon Dowdy
Experts/Sources:
Craig Landry
Travis A Smith 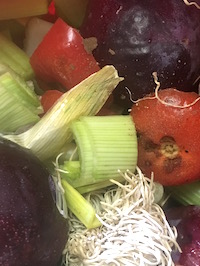 CAES News
Shoring up the species barrier Posted on 11/16/21 by John H. Tibbets
In the latter months of 2019, a novel coronavirus probably leaped from a yet-unknown animal in central China into a human. Some speculate that SARS-CoV-2 leaked from a laboratory in Wuhan, China. But evidence suggests that it’s far more likely that the virus was a natural “zoonotic” leap from animal to human. The resulting COVID-19 pandemic has killed hundreds of thousands of Americans, including more than 23,000 Georgians, and mutated into dangerous new variants.
Subscribe for Updates