Seven years after a U.S.-led research project to increase peanut production ended, thousands of children in one of the most remote parts of the world continue to get a healthy snack every day, and women are bringing more income into the home through local small businesses.

A school-snack program funded through the U.S. Agency for International Development’s Peanut Collaborative Research Support Program at the University of Georgia College of Agricultural and Environmental Sciences continues in Guyana long after the USAID program ended.

The research project behind the snack program began as an initiative to improve the productivity of rural peanut farmers in Guyana. Three years into the project, scientists were making some gains in productivity, but noticed a lack of demand in the market for peanuts, leading them to shift focus. To take advantage of locally grown crops, such as cassava, peanuts and fruits, and the School Snack Program was born.

“Our project moved from straight productivity from an agronomic standpoint into more of an integrated small-business model,” said Greg MacDonald, professor of weed science and agronomy at the University of Florida and principal investigator for the project. Increasing the efficiency of peanut production was no longer the primary concern. Instead, researchers worked to nurture a local market to drive demand.

The surplus of peanuts was, in part, due to the remoteness of the peanut-growing area of Guyana, where rural farmers are dependent on middlemen to buy their crop; the farmers also have no way to keep up with fluctuating market prices in major urban areas.

In local markets, farmers can get their crops to consumers faster and are more empowered to sell when they want for a competitive price. New businesses that add value to local products create local market demand. Farmers with more profits then have more money to buy the finished products, creating a reciprocal relationship.

Seven of the larger villages in the southernmost part of Guyana (Region 9) hosted the new school-snack program, which relied on local farms to produce the crops, local small businesses to prepare and package the snacks and local school kids to consume them.

The program proved to be technically, economically and socially sustainable long after USAID financial support ended in 2011. The snack program grew from nursery and primary schools in seven villages serving 1,400 students in 2005 to 38 nursery and 28 primary schools in 41 villages in 2011. By then, the popular peanut butter and cassava sandwiches, along with a glass of local fruit juice, went to 3,400 children on a daily basis.

The program was supported by students, parents, teachers, donors and government officials and continued to expand after USAID support ended, reaching 4,000 students in 47 villages in 2014.

The small businesses that prepared the school snacks were predominantly operated and managed by women, said MacDonald, creating an opportunity for the new business owners to create income they’d never had before. Women trained in business management were able to support themselves by the income from these small businesses, a rare amount of independence in a place where most women must rely on male relatives.

Spending patterns began to shift when men were no longer the only ones with the power to make decisions about household finances, McDonald said. Women now had the ability to purchase items to meet the needs of their families.

Communities saw the benefits of the local programs and were able to invest in them when outside funding ended.

“We’ve seen a program that was originally reliant on government dollars have a ripple effect to where there are now small businesses growing,” said MacDonald.

People who received training not only learned skills for a specific position, but developed proficiencies in areas that provide future opportunities.

Over the past few years, women who worked creating the school snacks have launched other business ventures in food processing, wholesaling and retailing.

"The most significant achievement of the project over the long term will likely be the positive impact of creating sustainable small businesses. The fact that some cottage industries remain viable businesses benefits the children who receive snacks and the farmers who grow the peanuts, cassava and fruits, but they make the most difference in the lives of the people who work for the businesses and in the rural economies where they are located," said MacDonald.

The snack program proved to be a successful model for school feeding programs, and demonstrated the effectiveness of integrating women into the development process. It created fulltime jobs for more than 100 women in 47 villages and trained upwards of 250 women in small-business management.

Three of the original seven cottage industries launched with the school feeding project still are in operation, serving their communities with locally processed peanut butter. One even ships peanut butter to markets in the capital city, Georgetown. 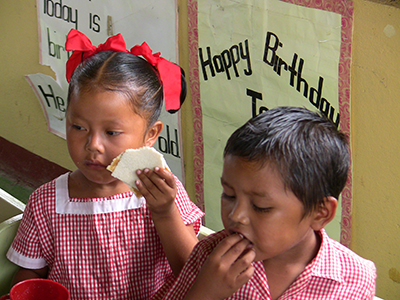