Poultry litter can cause fires if stored improperly

Barn fires have long been known as a potential hazard of storing hay, but a recent barn fire in Madison County, Georgia, revealed another hazard — poultry litter.

It’s never good to get a call from the fire department, but at the end of January, the local fire station called the University of Georgia Cooperative Extension office in Madison County to discuss a fire at a nearby farm. The fire had started in a barn used to house poultry litter, hay and farm equipment.

The firefighters needed to know the best way to safely put out the fire while handling the poultry litter from an agricultural standpoint. I was curious as to how this all started; I was familiar with hay catching fire, but I was not aware of instances of fire caused by litter. While firefighters were still dealing with the fire later that day, I visited the farm to try to determine what happened.

The barn was an open-sided metal structure used to house hay for cattle, farm equipment, and poultry litter from the grower's poultry houses. My initial thoughts were that the hay had started the fire, but the timing didn’t make sense — hay would be more of an issue during haying season, when hay is fresh.

In this case, the poultry litter was the origin of the fire, but the litter itself never seemed to be engulfed in flames. The litter was stacked against wooden walls that separated it from about 100 rolls of hay. I believe the temperature inside the poultry litter rose high enough that the wooden wall became hot enough to ignite the hay. The fire destroyed much of the barn’s roof, damaged farm equipment and destroyed nearly all of the hay.

Neither the farmer nor the firefighters were hurt, and the fire provided a teachable moment for poultry producers and others who store hay and poultry litter.

A few tips from UGA Extension will hopefully help reduce the risk of a structure fire and potential injury or loss of property.

Poultry litter is a valuable by-product for farmers and is used as a soil amendment and fertilizer. Proper storage is important to keep a beneficial product from creating a fire hazard.

Following these guidelines and working with your local fire department to discuss emergency accessibility to your farm can make life safer on your land. 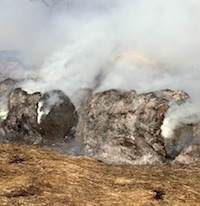 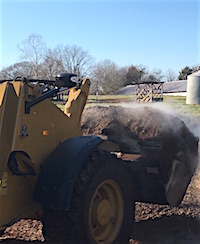