Savannah, Georgia, lost hundreds of trees when Hurricane Matthew hit in October 2016, followed less than a year later by Hurricane Irma in September 2017.

“We’ve been looking at how much Savannah’s urban tree nursery had been lost over the decades,” says Nick Deffley, sustainability director for the city of Savannah and lead on the project. “We were losing a lot of trees to development, some were just getting old, and we had two hurricanes in the last three years that took a toll as well.”

The hurricanes caused significant damage to Savannah’s tree canopy, with Hurricane Matthew costing over $13 million in tree debris removal and unknown losses in water storage from mature trees. The city of Savannah owns more than 350 flood-prone Federal Emergency Management Agency (FEMA) lots that are underutilized community assets. As coastal Georgia experiences extremes in weather, municipal governments are looking to green infrastructure, such as tree canopies, to improve their resilience to major storm events.

Deffley is working with a team of experts, including land-use and resiliency specialists at UGA Marine Extension and Georgia Sea Grant, to engage community members in the project, helping them to understand the risks they face and recognize the benefits of implementing green infrastructure, such as tree canopies.

Over the course of the project, more than 500 trees will be planted by trainees in the Landscape Management Apprenticeship Program, an innovative workforce-development program that trains residents in arbor care, plant identification, installation and maintenance.

Twelve employees are currently in the training program, all recruited through two events hosted by the city of Savannah and WorkSource Coastal, a federally funded program designed to assist coastal residents in job training and career placement.

“I’ve always stayed in a box as far as administrative work, and I just wanted to branch out,” said Ni’Aisha Banks, 27, a mother of three who is expecting her fourth child.

Banks is studying business administration at Savannah Technical College and plans to own her own business one day. She decided to sign up for the landscape-management program because she wanted to try something new. After two months in the program, she was able to help her peers install an irrigation system at a planting site in downtown Savannah.

In December, participants attended a four-day training modeled after the Georgia Certified Landscape Professional (GCLP) program, developed by UGA Cooperative Extension’s Center for Urban Agriculture in Griffin, Georgia. They heard from experts in green infrastructure and landscaping and took a field trip to the UGA Coastal Georgia Botanical Gardens, where they practiced planting trees and installing irrigation systems.

The experience exposed them to green industry careers and helped show the pathway to employment and advancement through skill development and professional certification.

During the year-long program, Deffley will guide participants through more than 200 hours of hands-on training in landscape maintenance. They’ll also learn how to set up an email account, build a resume and create business cards, all tools that will help them get ready to enter the job market.

“The whole intent is to not only introduce all of these folks to potential employers in this field, but to do everything we can to get them placed in jobs that are much more sustaining,” says Deffley.

All of the programs’ trainees live in neighborhoods where plantings will take place. While gaining new skills that are vital to implementing green infrastructure in Savannah, they are also educating other community members about the project.“We’re out here three days a week, and every day people ask, ‘What are you guys doing?’ ” said Robert Hartwell, one of 12 participants in the program. “People need to know about this stuff, you know? It starts with the community.”

Like Banks, 24-year-old Hartwell wants to own his own business. He plans to apply his new landscaping skills in his uncle’s backyard, helping him raise his walkway and put in a flower bed, before tackling his own lawn.

“I’m building my portfolio,” he says. “You’ve got to start somewhere, right?”

Emily Woodward is the public relations coordinator for the University of Georgia Marine Extension and Georgia Sea Grant program. 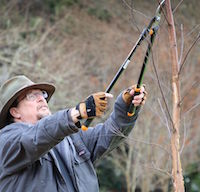 CAES News
When to prune landscape plants — and how to do it right 03/29/22 Ashley Brantley
Do you have a yard full of woody ornamentals? Are you unsure of when or how to prune them? With diverse growth habits and varying pruning requirements, it can be overwhelming to try to figure out when and how to prune each variety. Not pruning correctly, or at the wrong time, can lead to plants to become irregular in shape, more vulnerable to cold damage or pests, or less likely to flower at their full potential.

CAES News
Are your trees boys or girls — or both? 10/18/21 Kim D. Coder
Female flowers and female trees produce fruit and seeds. Male flowers and trees produce pollen. Making the correct choice of tree gender can be important. Anyone who has ever smelled putrid ginkgo fruit, washed mulberries off their car or sneezed at tree pollen should understand.
Subscribe for Updates