Building a safer food system from the inside out

The digestive tract of a cow is home to a diverse population of bacteria and microbes representing about 2,000 different species.

There are good guys. There are bad guys. And there are the guys who can cause trouble if the situation is right.

Todd Callaway, assistant professor in the University of Georgia College of Agricultural and Environmental Sciences (CAES) Department of Animal and Dairy Science, has spent his career trying to determine how all these microbes interact with each other and the animal. Ultimately, his work contributes to the health of livestock and the safety of the food supply.

Callaway received both this bachelor’s and master’s degrees from UGA before attending Cornell University for his doctoral work. He spent 17 years working for the U.S. Department of Agriculture (USDA) Agricultural Research Service, where he investigated ways to keep livestock and poultry healthier to keep our food supply safe.

“I've spent my career working on interventions that reduce the chance of Salmonella and E. coli contamination in meat and poultry by controlling these bacteria in livestock preharvest,” said Callaway, who is also an adjunct faculty member in the Department of Poultry Science and at the UGA Center for Food Safety in Griffin, Georgia.

Working at the intersection of nutrition and microbiology, Callaway makes sure that what farmers feed their livestock and poultry contributes to good gut integrity and gut health. Protecting the balance of bacteria in the digestive tract protects the supply of beef and chicken from being contaminated with E. coli or Salmonella after the animals go to slaughter, he said.

Researchers have known for more than two decades that the microbial population of livestock animals plays a crucial role in their health and in food safety. But they still don’t have a clear picture of how everything works together.

Our digestive tracts are an ecosystem, like a forest or swamp, rather than a somewhat closed and controlled environment, like a zoo or an aquarium.

These systems are a lot more complex than a holding pen for germs, he said.

“A lot of the microbiome work out there on people and on animals is like taking a class photo of all of the microbes in the intestines,” Callaway said. “It really only tells you who was in class on the day of the picture — it doesn’t tell you anything about how they all behave together.”

That’s the next frontier for microbiome work, Callaway said, and it’s what he and his colleagues in nutrition and microbiology are focused on.

Currently, Callaway and his postdoctoral student Jeferson Lourenco are working with the USDA Agricultural Research Service in Athens, Georgia, on a project comparing the microbiomes of free-range chickens to those who are raised in traditional broiler houses. The birds eat different foods and have different exposure to antibiotics, but Callaway isn’t finding the differences one might expect.

“We found some differences but nothing to hang your hat on,” he said.

Why is that? That’s the question today’s researchers are trying to tackle.

“We have to start moving past that class-picture view,” he said, “If we can start putting things together like grades, after-school clubs and what they did outside of school, then we can start to understand the impact these bacteria may be having on each other and on the animal’s health.”

Right now, because the cost of running genetic profiles on an entire population of microbes has come down substantially, there are more microbiome “cures” on the market for livestock without much evidence of effectiveness.

“When you have a hammer, everything in the world is a nail,” Callaway said. “Right now we have people running around doing microbiome studies, but we don’t have the biology to back up a lot of it. We still don’t know exactly how all of the parts work together.”

For more information on Callaway’s work at UGA, visit animaldairy.uga.edu/people/faculty/todd-callaway.html. 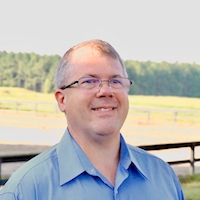 CAES News
UGA professor works with producers, students to improve cattle production in Georgia 11/14/22 Amanda Budd
With dual roles in the University of Georgia College of Agricultural and Environmental Sciences and UGA Cooperative Extension, Pedro Fontes engages with stakeholders and producers, as well as his students, to teach them about beef cattle reproduction and current technological advancements in the field.
Subscribe for Updates