CAES Horticulture Professor Tim Smalley received GGIA's Vivian Munday/Buck Jones Memorial Lifetime Achievement Award, the association's most prestigious honor. The award is presented when there is an individual deserving of recognition for a lifetime of accomplishment and contributions to the Green Industry.

Smalley has mentored and inspired generations of UGA horticulture students, guided trips around the world and most recently became the UGA Horticulture Department’s interim department head.

His career began as a student gardener at the Royal Botanic Garden in Edinburgh, Scotland, and went on to positions including tree farmer at Walt Disney World and assistant director of the botanical garden at Cornell University.

As a scientist, he has conducted research on the effect of soil amendments on growth and water-stress tolerance of ornamental plants. He has led courses in nursery management, landscape contracting and horticulture professionalism while also serving as the departmental undergraduate scholarship, internship and jobs coordinator.

Smalley has taught the popular Woody Landscape Plant Identification and Use course at UGA, which leads students across campus to learn about the thousands of trees and shrubs that comprise the UGA Campus Arboretum. He has also been a longtime advisor for the UGA Horticulture Club.

His Art and Gardens of the Grand Tour study-abroad program has heightened students’ horticultural and cultural appreciation since 2001.

Smalley received the 1994 D.W. Brooks Award for Teaching Excellence, is an eight-time recipient of the horticulture department’s Outstanding Teacher Award and is a member of the UGA Teaching Academy. He received the National Association of Colleges and Teachers of Agriculture’s Teaching Award of Merit in 1995 and the American Society for Horticultural Science’s Outstanding Educator Award in 2014.

David Berle, a UGA horticulture associate professor, received GGIA’s Educator of the Year Award. The award honors an individual who has made an outstanding contribution to ornamental horticultural research and promotion of the Green Industry through academic endeavors.

Berle’s primary objective in teaching is to help students understand the connection between scientific aspects of horticulture and how horticulture can play a major role in solving many current ecological problems.

He has introduced thousands of UGA students to horticulture through teaching and as the director of the wildly popular UGArden, UGA’s student-run garden. The much-heralded teaching garden took shape due to Berle’s vision and a grant that helped fuel its early growth. There he has taught countless students, both for classes and as volunteers, practical lessons on raising crops. The garden also provides produce to disadvantaged families and local schools.

His credentials include bachelor’s and master’s degrees in agriculture from North Carolina State University and he is pursuing a masters’ degree in landscape architecture from UGA.

Greg Huber, the training coordinator for the Center for Urban Agriculture, received GGIA's Communicator of the Year Award. The award honors the individual who best served the horticulture industry in Georgia through the media and other forms of promotion.

Huber is a 1996 graduate of the UGA College of Environment and Design and a Georgia-registered landscape architect with experience in site planning, landscape construction and management, irrigation, field production, retail nursery sales and technical instruction.

He joined Center for Urban Agriculture, based on the UGA Griffin campus, in 2016. Huber communicates timely information and announcements to the landscape and turf industries through Landscape Alerts and Updates and the Georgia Certified Landscape and Plant Professional newsletters.

He was the recipient of GGIA’s Educator of the Year award in 2015 and Southern Crescent Technical College’s Rick Perkins Award for Excellence in Technical Instruction in 2012.

The UGA Center for Urban Agriculture’s booth in the GGIA tradeshow was awarded third place in the Best in Show non-plant category. UGA Extension agents were on hand at the booth to provide information on Green Industry programs available through Extension.

The focal point of the booth was the Georgia Center for Urban Agriculture’s personal UGA mascot, Agga. Huber designed the mascot which wears a green sweater and is adorned with plant life typically found in urban landscapes. Huber also designed the UGA Griffin Campus’ original Uga mascot which is located on the campus quad where it welcomes visitors to the campus. 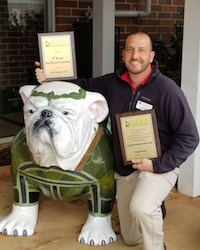 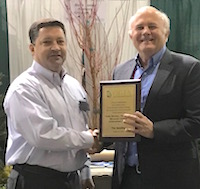