At 54, Becky Griffin was the oldest University of Georgia student on the Griffin campus to be awarded a degree this fall, but that fact only fueled her drive to succeed.

After putting her graduate studies on hold for 30 years, Griffin juggled a full-time job and put thousands of miles on her car to complete her master’s degree. The mother of two adult daughters, both of whom are UGA graduates, Griffin was encouraged to finish her degree by Kris Braman, a former UGA Griffin researcher who now heads the UGA Department of Entomology.

“Deciding to go back to school after 30 years was a huge decision. When I told Dr. Kris Braman why I didn’t have a master’s degree, she said, ‘Well, we need to fix that.’ She encouraged me to apply, helped me map out a plan and served as my major professor throughout this process. She was the first person on my team,” Griffin said.

Serving as the student speaker at the UGA-Griffin fall graduation celebration on Dec. 13, Griffin credited the members of her personal and academic support system for helping her finish her master’s degree in plant protection and pest management with an emphasis in entomology.

“Getting through college is a team effort. Every graduate here is the result of a team and I am proud of all of us,” she said. “The University of Georgia is one of the top colleges in the nation, and being a graduate of this university is something I don’t take lightly.”

Griffin said she was encouraged by “Team Griffin,” her affectionate term for her supporters, including her husband, Millard; her daughters, Allison and Mady; Braman and a host of others.

“Allison sent me a finals care package, something I did for her when she was in college,” said Griffin, proudly informing the crowd that Allison is a double Dawg with both bachelor’s and master’s degrees from UGA. Both of Griffin’s daughters were residents in the same dorm she lived in when she first attended UGA. “Mady and Allison sent me flowers, proofread papers and listened to way too many entomological facts.”

A resident of Holly Springs, Griffin travels across the state as community and school garden coordinator for UGA Cooperative Extension. While pursuing her master’s degree, there were days when she left home at 4:30 a.m. in order to attend a lab on the UGA Tifton campus.

“I’ve listened to lectures from McDonald’s and Chick-fil-A restaurants while traveling for my job,” she said. “The Atlanta Food Bank even set aside a room for me, so I could listen to lectures before work meetings.”

When she returned to classes, Griffin showed up with a spiral notebook, pencil and index cards in hand. The other students quickly explained to her that she could do all of her work online.

“As an older person, I soon found myself giving the younger students advice and even job recommendations. My fellow students are amazing. They have enriched my life and I have learned from them,” Griffin said.

Griffin valued the experience of learning from UGA researchers who are leading experts in their fields, such as UGA entomologist David Buntin, who explained how hessian flies affect grain crops, a lesson based on his own research.

“This is why you want to go to UGA. You don’t sit in a classroom learning about (other experts’) research; you are learning from the person who is doing the research,” Griffin said.

Griffin’s UGA CAES colleagues were also there to help, she said, recalling a day when UGA turfgrass specialist Clint Waltz spent hours tutoring her on a math problem.

“He was a part of my team,” she said. “And, when I was at a farmers’ conference and pulled out my textbook to try to understand how to calibrate a sprayer, several of my farmer friends stepped up to explain it to me. They had no idea they were on Team Griffin.”

Teary-eyed, Griffin told the graduates that all the effort to earn her degree was worth it when she was finally able to walk under the arch and ring the chapel bell.

“We are all so much more capable then we think we are, but we need a team to do it,” she said.

Also a UGA alum, Broder told graduates their UGA degrees will be tools that they will use throughout their careers. Recounting a time when she, the youngest person in her office, was asked to step into a leadership role, Broder encouraged graduates to go out into the world and be leaders.

“For those of you who are entering the field of agriculture, you will have a remarkable chance to impact one of the biggest industries in the state, and one that desperately needs help,” said Broder, whose family includes cattle farmers. “The farming population is aging quickly. Agriculture in Georgia needs young, vibrant minds and voices. Answer the call and lead this industry into the next generation. Society desperately needs real voices with conviction and passion.”

For more about degree programs offered at UGA-Griffin, visit www.uga.edu/griffin. 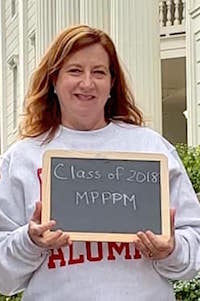 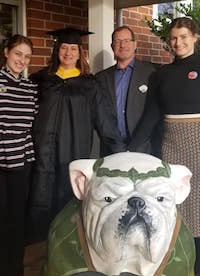