Install plants now and watch them thrive in the spring

Now is the best time of the year to install new trees, shrubs and perennial plants. Although cold weather won’t allow the aboveground parts to grow much, the roots will continue to grow and expand, allowing the plant to become established. By next summer, these trees and plants will be able to tolerate the intense heat and dry conditions.

When choosing plant material, make sure the plants you select can tolerate Georgia’s climate and the site you select.

Does the plant prefer full sun or does it need some shade? For example, azaleas thrive in shady sites but will deteriorate in full shade. They are also more susceptible to lace bugs, a damaging insect pest. Roses cannot tolerate shade and need sunlight to thrive.

When selecting a site, also consider the soil’s ability to drain. Some plants, such as river birches, red maples and willows, can tolerate wet sites while many others will perish. White pines, ornamental cherries, spruces and firs suffer from the heat of Georgia summers and should not be planted. Others, such as pittosporums, oleanders, loquats and Indian hawthorns, can be damaged by hard freezes and are more suited to the southern part of the state.

Another important thing to consider is how large the plant will grow. Many times, trees are planted under power lines and must be severely pruned or removed later. In other cases, trees and large shrubs are planted in sites they outgrow, such as the open spaces between sidewalks and streets.

For example, Leyland cypress trees are often denied the space they need. The evergreens can grow up to 60 feet in height and 15 feet in width. These trees should be spaced at least 10 to 15 feet apart, but that is seldom done. Most people want an instant screen and plant them 5 to 6 feet apart. In time, the plants crowd each other, restricting airflow and creating shade, thus increasing the likelihood of the trees becoming diseased and dying early.

Some plants are problematic by nature. For example, Bradford pears grow at a rapid rate and have weak wood. This makes their branches and sections of the trees more susceptible to breaking off and falling. Red tip photinias and Indian hawthorns are troubled by a fungal leaf spot disease that defoliates them, causing them to perish. Scale insects heavily infest certain euonymus shrubs. Avoid planting these since they will eventually have to be removed.

Make sure you purchase high-quality plant material. Avoid buying plants that are wilting, have insect or disease infestations, or have weeds growing in the containers.

Also, check the rootball. The roots should fill the rootball, and they should be creamy white to light brown. If the roots are sparse and dark, the plant is not healthy. Also, avoid plants whose roots are compacted and have grown tightly around the rootball.

When planting, dig the hole two to three times the size of the rootball but not deeper than the height of it. Do not use any soil amendments. Just use the soil that was removed and fill in around the plant. If the roots are tightly grown on the outside of the rootball, make three to four cuts with a knife around it to break up the roots to encourage them to expand outward.

Once the plant is planted, apply a 2 to 4-inch layer of organic mulch, such as pine straw, pine bark, cypress bark or wood chips. Keep the plant watered to ensure the soil stays evenly moist.

For more information about caring for ornamental landscape plants, see University of Georgia Cooperative Extension Bulletin 1065, which can be found at extension.uga.edu/publications.

Timothy Daly is an agricultural and natural resource agent with the Gwinnett County Cooperative Extension office. 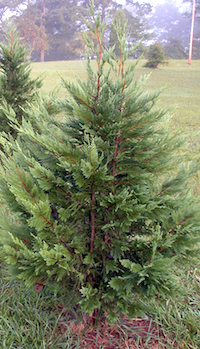