Zhongyuan Liu, a University of Georgia doctoral candidate in agricultural economics, knows that analyzing data sets won’t give you a very clear understanding of the impact of rural land reforms in China.

For that, you have to talk to farmers.

As part of his doctoral thesis project, Liu used funding provided by the College of Agricultural and Environmental Sciences Office of Global Programs Graduate International Travel Award to interview farmers, village leaders and officers in a land reform office in the Wujin district of Jiangsu province in China.

For generations farms have been a lifeline of rural Chinese culture, providing a place to grow the rice and vegetables essential to feeding their families.

Agricultural production doesn’t provide enough employment for the population, however. As a result, beginning in the late 1980s, migration to urban areas became common. By 2017, more than 172 million people had moved to the cities and went to work in factories. That migration has accounted for between 16 and 22 percent of China’s growth in its gross domestic product, according to Liu.

“Although the labor market is well developed and restrictions on migration have been removed, the number of people moving for jobs in urban areas hasn’t increased as much as is needed,” Liu said. “Rural land reform, however, could further release the potential of the rural labor stock.”

In China, like many other developing countries, property rights require demonstrating that the land is being actively farmed by the family that owns the land. To encourage more efficient land use, land certification and titling programs, which allow families to maintain land ownership without actively farming, have been adopted in several Chinese provinces, Liu said.

To remove the obstacles caused by insecure property rights, the Chinese Central Government implemented a land-titling program in 2008 with a series of pilot projects in several provinces. The program is scheduled to finish by the end of this year, and each farm household is entitled to a land certification.

“Land certification is not a new thing in China,” Liu explained. “Many rural households had the land certification after the new contract period around 1997, but the certifications did not have precise information on geographic position and the information archives management was in disorder. The new program evolved to include GPS surveys that better document the property lines that have been observed by the farmers.”

For his case study, Liu interviewed local land reform officials in the Wujin district of Jiangsu province, one of the most developed areas in China. He also interviewed a village leader, farmers who work in nearby factories in addition to farming, and a representative of a large-scale family farm.

The pilot phase of the land-titling program in Wujin district was first carried out in 2014. In 2015, the project was extended to the whole district, and now about 95 percent of farmers in this district have signed the contracts and are receiving their land certificates.

“The biggest challenge of the land-titling program in Wujin district is the dispute between small farmers and large-scale family farms,” Liu said. “Specifically, many small farm households left their contracted land idle or rented it out before 2004 when agricultural production was unprofitable because of the high agricultural tax and fees.”

“If the collective is entitled to land property rights, the farmland in the whole village could be operated or rented together by several large-scale family farms and the small farm households could receive a rental fee or bonus,” Liu said. But under the current system, negotiations have to be conducted with each farm household, a process that can be slow and unwieldy.

“Farmers are generally glad to have the land-titling program,” Liu said.

Two farmers told Liu that they do not worry about losing their land anymore because they have land certificates in their pockets.

“Overall, I learned a lot during the summer trip,” Liu said. “On the one hand, I learned a lot of information which I did not find from the literature review and I am more comfortable about my research now. On the other hand, I developed my skill and knowledge in organizing a case study.”

While rural China’s ongoing structural changes present a wealth of interesting research questions, Liu said he also has a personal interest in this area of research.

“I was born and grew up in a remote and poor village in the middle east of China, and I was one of millions of internal migrants in the early 1990s,” he said. “I have had such unique and precious experiences in my life and I feel I can do something to improve the welfare of farm households.” 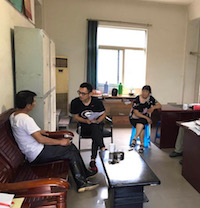