A native of Brazil, da Silva began working at UGA-Tifton on Aug. 1, when he began developing his research and extension program. Since the fall, he has been conducting field experiments related to fertilizer and irrigation management.

“My objective is to provide our growers critical information on irrigation and crop nutrient requirements. From there I can help growers reduce fertilizer inputs and irrigation costs while maintaining yields for better profits over all seasons,” da Silva said.

To do this, da Silva is studying cabbage and carrot varieties and their fertility requirements. In the spring, he will begin researching cucumbers, eggplants, squashes, watermelons and bell peppers.

He will investigate the use of plastic mulching and its effects on plant growth and yield. His goal is to identify the point when multicropping in the same plastic mulching is no longer beneficial for crop production.

Part of da Silva’s assignment is to discuss his vegetable research with Georgia farmers. Vegetables had a farm gate value of $1.14 billion in 2016 in Georgia, according to the UGA Center for Agribusiness and Economic Development, but the commodity incurred $480 million in direct losses following Hurricane Michael in October.

“About 40 to 60 percent of those crops were affected, except sweet corn where 90 to 100 percent of fields were damaged,” da Silva said. “There wasn’t much that growers could do. All we could tell them was ‘Harvest as much as you can and try to store it.’”

His path to a career in crop production research began in his hometown of Maringa, Brazil, where he grew corn, wheat and soybeans and learned the importance of the soil. For da Silva, experiencing the day-to-day life of a farmer stirred up a lifelong passion for agriculture.

By the time he applied for college at the State University of Maringa, da Silva had decided to study agronomy. He earned a bachelor’s degree in agronomy in 2011 and a master’s degree in vegetable production in 2013.

After graduation, da Silva moved to the U.S. and attended the University of Florida where he earned a doctorate in horticultural science with a minor in agricultural engineering. He then set his sights on the next phase of his life — being a scientist.

“I saw the large amount of vegetable production here (in Georgia),” said da Silva of his decision to accept a position at UGA-Tifton. “[I also saw that] there was a need to improve their irrigation scheduling and fertilizer management.”

(Bryce Ethridge is an intern for the UGA Tifton campus.) 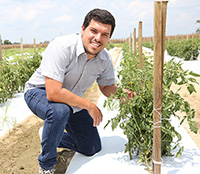