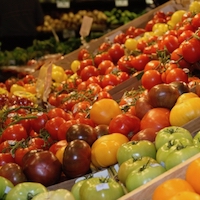 CAES News
Georgia flower farm puts sustainability, employees first Posted on 11/04/21 by Emily S Davenport
Principles before profit has been 3 Porch Farm’s business model from the beginning. When the farm was just a dream, Steve and Mandy O’Shea — owners and operators of 3 Porch Farm — knew that they wanted to use their business to do as much good as possible. And now, with more than 10 years of farming under their belts, the couple’s commitment to sustainability is evident in everything they do on the farm.
Subscribe for Updates