When people think of Georgia peanuts, they often think of the thousands of acres planted on the western half of the coastal plain. But the truth is that east Georgia boasts its share of peanuts as well.

During the 2018 Georgia Peanut Tour, about 200 industry leaders and other peanut stakeholders learned about the eastern half of Georgia’s peanut belt — from the Bulloch County fields that produce more than $20 million worth of peanuts a year to the Port of Savannah, where Georgia’s peanut exports are sent overseas.

The Georgia Peanut Tour is organized by the Georgia Peanut Commission with the help of industry leaders and peanut researchers at the University of Georgia. It’s designed to help peanut stakeholders, who are not familiar with Georgia agriculture, to learn more about the local impact of peanut farming and how commission-funded research impacts individual growers and farms.

This year’s tour attracted attendees from more than 20 states and four countries outside of the U.S., according to Joy Crosby, communications director for the Georgia Peanut Commission.

Over the course of the three-day tour, experts from the University of Georgia Peanut Team and peanut farmers from across the region explained the link between Georgia’s peanut industry and the research pioneered by agricultural scientists at UGA.

“Georgia peanut farmers realize that research is what’s going to move them forward,” said Bob Kemerait, a peanut plant pathologist with UGA Cooperative Extension and a Georgia Peanut Tour committee member, explaining that farmers fund over $1 million in research each year through the peanut commission.

One research success farmers pointed to repeatedly during the tour was UGA peanut experts’ work to control tomato spotted wilt virus in the state’s peanut fields.

“When I first started seeing this (tomato spotted wilt virus) problem, I said, ‘This is going to put us out of the peanut business,” said peanut farmer Charlie Cromley during a harvest demonstration at one of his family’s peanut fields near Springfield, Georgia.

“That’s a testament to the research at UGA, which has supported the peanut industry in this state. We were facing a big problem, and they found some cultural practices and other methods that we could use to control the problem before it became too widespread.”

The tour also gave farmers the chance to demonstrate how they’ve put the latest research into action. At the Boddiford Farm in Sylvania, Georgia, father and son team Joe and Knapp Boddiford showcased how new precision agriculture technologies have reduced the amount of water they use to irrigate their crop and how it has resulted in more productive peanut plants.

For more information about the impact of the UGA Peanut Team, visit peanuts.caes.uga.edu. More photos from the 2018 Georgia Peanut Tour are available at www.flickr.com/photos/ugacommunications/albums/72157671678251397.

Merritt Melancon is a news editor with the University of Georgia College of Agricultural and Environmental Sciences.
Authors:
Merritt Melancon
Experts/Sources:
Bob Kemerait 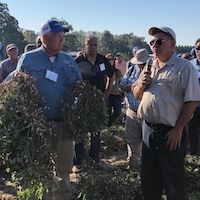 CAES News
Student Profile: Passion for math applied to ag productivity questions Posted on 04/21/21 by Cameron L. Miller
Sean Posey didn’t see how agricultural economics would feed his love of math, but a decade into his grad school journey, he’s using those skills and interests to help improve farming practices in Africa. From information communication technologies to gender roles in information-sharing and incentivization programs that will improve groundnut health, Posey has been focused on improving agricultural practices and public safety for the past four years. At the University of Georgia completing his PhD, Posey is working on a research project led by professor Nick Magnan through the Peanut Innovation Lab
Subscribe for Updates