People don’t often associate Georgia with soybeans, but for a time last week, the state became the epicenter for international soybean science.

More than 300 plant breeders, molecular biologists and commercial researchers converged on Athens, Georgia, for the 17th Biennial Conference on the Molecular and Cellular Biology of the Soybean.

The meeting showcased new research in gene characterization, genome editing, soybean engineering, and soybean biology and environmental interaction. Presenters came from around the globe and were hosted by University of Georgia soybean scientists and College of Agricultural and Environmental Sciences professors Scott Jackson, Zenglu Li and Wayne Parrott.

“We really had some of the most cutting-edge concepts and ideas in soybean biology presented this week,” said Jackson, of the UGA Center for Applied Genetic Technologies. “From increasing yield to achieving insect and disease resistance, understanding the molecular biology of the soybean is going to help us build a more bountiful and sustainable food supply as the world’s population grows.”

Farmers around the world grow about 250 million acres of soybeans, and the demand for the crop is growing. In 2018, soybean acreage planted in the U.S. overtook the nation’s planted corn acreage for the first time. Georgia farmers grow about 180,000 acres each year mainly to produce cooking oil.

For more information about soybean breeding and molecular biology at UGA, visit cropsoil.uga.edu. 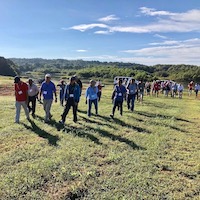 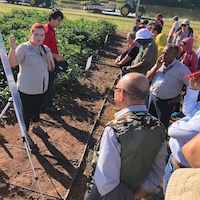