For the past 100 years, research from the University of Georgia Tifton campus has impacted international agriculture, from the world’s food supply to its fields of play.

“This is a great day in the history of the UGA Tifton campus. We are here to celebrate 100 years of research, Cooperative Extension and teaching that has truly impacted the world,” Pardue said. “Agriculture is our state’s top industry, and much of that success is due to the scientists who have worked here for decades.”

The city of Tifton was awarded the Coastal Plain Experiment Station, now UGA-Tifton, on May 3, 1919. Since then, scientists have focused their research projects on row crops like cotton, peanuts, tobacco, small grains and soybeans in addition to livestock, pecans, fruits, vegetables and turfgrass. Today, the campus is also a leader in irrigation research, precision agriculture and its accompanying technologies, like GPS.

“This is one of those days for people who work here, who study here, who graduated from here and who retired from here after many years of service to be proud of what today represents,” West said.

One of the special guests in attendance at the kickoff was Catherine Tift Porter, a descendant of Captain H.H. Tift, who established Tifton. Tift was also part of the Georgia Landowners Association that successfully lobbied the state legislature to create an agricultural experiment station in the Coastal Plain region.

Porter helped to blow the ceremonial whistle to cap off the afternoon’s festivities. A steam whistle was used 100 years ago to announce to downtown Tifton that the city was selected as the home of the experiment station.

Following the centennial kickoff, a special reception was held in the Tift and Agricultural Research (ARB) buildings. The first two structures on campus, both buildings were recently renovated, the Tift Building in 2016 and ARB in 2018.

UGA-Tifton’s faculty roster includes world-renowned scientists who have made far-reaching impacts over the past century.

Research geneticist and plant breeder Glenn Burton, who worked at UGA-Tifton from 1936 to 1997, helped to save millions of people from starvation in India and Africa through his pearl millet research. One of his greatest accomplishments involved transforming Bermuda grass into a top forage grass.

James Shepherd, who worked at UGA from 1946 to 1974, was an agricultural engineering department head. He developed and tested the first peanut combine harvester in 1949. Current combines use the same concepts that Shepherd developed.

Current UGA-Tifton researcher Peggy Ozias-Akins is a molecular geneticist who studies peanuts. She helped to sequence the peanut genome in 2014, which helps researchers and plant breeders across the world breed more productive, resilient peanut varieties.

UGA-Tifton has also been a leader in internationally recognized technological developments. Scientist George Vellidis has been on the forefront of precision agriculture, a subject he teaches to UGA-Tifton’s undergraduate students.

UGA-Tifton researchers from different disciplines collaborated to help thwart pest infestations, like the boll weevil in cotton and kudzu bug in soybeans.

“It doesn’t matter if you’re here in Tifton or halfway around the world, our campus is recognized as a leader in the agricultural industry,” West said. “To be a small part of that impact that spans 100 years, that’s truly an amazing feeling.” 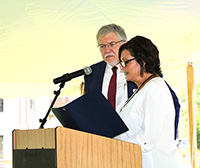