This year, two additional solar panels were installed at the Future Farmstead, a water- and energy-efficient research home on the University of Georgia Tifton campus, as part of a project by Eagle Scout Bailey Veeder of Athens, Georgia.

Veeder began working at the Future Farmstead when he was a Young Scholar during the summer of 2017. He worked with Craig Kvien, a UGA College of Agricultural and Environmental Sciences professor on the university’s Tifton campus. The Young Scholars Program pairs high school students with faculty members on UGA’s Athens, Tifton and Griffin campuses for six weeks over the summer to take part in hands-on research opportunities.

“He worked down here for the summer on solar panels, and he decided to take that further and turn it into an Eagle Scout project. He came down with his troop and put up two other solar panels,” Kvien said. “One is over the aquaponics area in the circle area of the driveway and the other is over by the turfgrass plots.”

Kvien said the troop took aluminum frames that were already in place and added the solar panels to them. Then, with the help of Kvien’s work crew, the steel structure was set up and painted. Now the system just needs to be wired.

The new solar panel installation will increase solar energy production to cover the home for 90 percent of the year, which makes the house even more energy efficient year-round.

Some of the other features that improve the home's energy and water efficiency include an energy recovery ventilation (ERV) system; double-pane windows with argon; a gray water system; a wheelchair lift; a 10-kilowatt (kW) solar array; a WeatherSTEM station; solar tubes; solar hot water and heat pump systems; a 30 energy-efficiency ratio (EER) ground-source heat pump heating, ventilation and air conditioning (HVAC) system; and a combination of closed-cell foam and insulation made from recycled blue jeans to give the home walls with an R-30 insulation rating and an R-40-rated roof.

“It is a living lab, where students, teachers and partners work together to develop and document systems that will make life more efficient,” said Kvien. “We hope that everyone can learn and benefit from our research.”

An edible landscape, designed by Katherine Melcher of the UGA College of Environment and Design, surrounds the Future Farmstead. UGA researcher Gary Burtle manages the 2-acre pond next to the house. He also uses the pond to teach aquaculture to college students. The Future Farmstead’s carriage house serves as a classroom for UGA faculty. The house also serves as home to several CAES graduate students. Several thousand elementary and high school students, along with many building professionals and homeowners, visit the house each year to learn about its features.

For more information on the Future Farmstead, please visit www.futurefarmstead.com or follow their WeatherSTEM at www.tift.weatherstem.com/ugatifton.

Cristina deRevere is the public relations coordinator for Georgia 4-H. 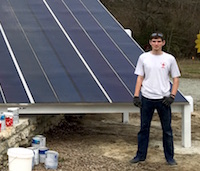