Keep skunks away by controlling mice and rats

Skunks are one of the most common, and often unwelcome, nocturnal species that visit our backyards here in Georgia. Skunk breeding season has passed, but we are quickly approaching the time of year when females will birth their young.

There are two species of skunk native to Georgia: the striped skunk and the eastern spotted skunk.

Striped skunks are commonly referred to as “polecats” and are probably one of the most recognizable mammals nationwide thanks to cartoon characters like Pepe Le Pew and the ironically named Flower from Disney’s “Bambi.” These small critters are about the size of a common house cat and are known for their black fur and white stripes.

While both species of Georgia’s skunks are quite beautiful, they are often viewed negatively due to the pungent, musky odor they can emit. This odor lingers for days and can become nauseating for some people.

Aside from their odoriferous smell, skunks often set up dens close to or underneath dwellings. They are prone to digging up lawns and golf courses in search of insects and grubworms. In doing so, they leave conical shaped holes in well-groomed turf. Skunks may also raid backyard poultry pens and eat eggs and birds; eat garden vegetables; and damage beehives.

In addition to damaging lawns, denning under buildings and having a rather pungent odor, skunks carry a variety of zoonotic diseases, including leptospirosis and intestinal roundworms, and are one of the primary vectors for rabies in the United States. The potential for human exposure to rabies from skunks can be significant due to skunks’ inclination to urban and suburban areas.

There are a variety of control options to alleviate damage caused by skunks, but most homeowners aren’t comfortable trapping skunks because of the animals’ potential for carrying rabies and tendency to spray. Nuisance-wildlife removal specialists may be better equipped to remove skunks.

Control methods that do not involve contact with live animals include habitat modification and exclusion. The mice that tend to call crawl spaces, sheds and barns home often attract skunks to these spaces. Rodent management often eliminates the skunk problem.

In addition to rodent control, removing debris, lumber piles and junk cars eliminates potential denning sites and discourages skunks from using the area for a den location. Lawn treatments for grubs eliminates the food source and skunks’ motivation to dig.

In addition to habitat modification, skunks should be cut off from areas where they could potentially den. All foundation openings should be sealed off with wire mesh, sheet metal or concrete. Fences constructed around lawns and gardens should be at least 3 feet tall and buried 18 inches below the surface to prevent digging. Hardware cloth or chicken wire works well for exclusion fences. If skunks already use a crawl space, make sure they have left the area before installing exclusionary devices to prevent them from dying under the building.

Skunks’ black-and-white fur makes them one of the most beautiful animals to make our backyards their homes. Skunks can be beneficial because they eat many of the insect and grub species that can cause significant damage to turfgrass. However, because of their musky odor and potential for disease, most homeowners don’t want them around.

Use the techniques recommended here by University of Georgia Cooperative Extension to keep skunks from becoming an issue in your backyard.

To learn more from Michael Foster about controlling nuisance wildlife, attend the Agroforestry and Wildlife Field Day on Sept. 20, 2018. To register, go to www.ugagriffincontinuinged.com/awfd. 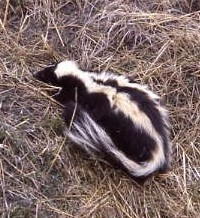