The best defense against fleas is a good offense

With the first few weeks of hot weather under Georgia’s belt for summer 2018, dog owners across the state may notice their canine companions starting to scratch a little more often.

While fleas are active year-round in Georgia, summer means it’s time to get serious about flea control for pets and for homes.

The key to avoiding having to fight fleas all summer is to tackle the problem as soon as you notice it, or even better to proactively prevent them, said Nancy Hinkle, professor of entomology at the University of Georgia.

Because of the flea’s life cycle, and the fact that they’re fairly invulnerable during the pupal stage, it is particularly important to get control of flea problems early.

“By late June and in July, the flea numbers are usually over the top,” said HInkle, a researcher in the College of Agricultural and Environmental Sciences. “Once the flea population has gotten established there is nothing that you can do immediately to end the infestation. (It’s going to take some time.)”

There are more than 2,000 flea species on Earth but the most problematic species in the United State is the cat flea. Despite its name, the cat flea is the most common flea on dogs and on cats across the country.

The cat flea will bite humans if there are no other hosts around, but it really has evolved to live on furrier mammals, like dogs and cats. It’s covered with spines so that it can hang on to its host, and once it finds a host it’s probably going to die there unless it’s mechanically removed.

If there are no dogs or cats — or wild animals — in a house, the flea population will not be able to survive by biting humans. They will eventually die out.

Biology of the Flea

Adult fleas lay eggs, which hatch in about two to four days. Their larvae hatch and survive by eating the detritus left by their parents. In about two to four weeks, the larvae form silk cocoons as they enter the pupal stage and prepare for their metamorphosis into adult fleas.

The fleas can survive inside their cocoons for months before emerging as adult fleas. Adult fleas live only  for about two to four weeks after they emerge but that’s long enough to find a blood meal, mate and lay eggs.

It’s important to understand the way a flea lives because it turns out it’s almost impossible to kill while it’s in that pupal stage. Each cocoon is like each flea’s personal doomsday bunker.

“You simply cannot spray enough insecticide to kill those flea pupae down in the carpet,” Hinkle said.

The flea has everything it needs to survive inside its cocoon for weeks or even months. The flea simply waits for a sign that a potential meal is in the area before it emerges, Hinkle said. They can sense changes in movement and carbon dioxide levels that usually indicate a host is near.

“They just sit there until there’s a chance at a blood meal, and that poses a real problem for pest control companies,” Hinkle said.

That’s because it may seem like the pest control program has worked until the next cohort of adult fleas emerge. That’s why repeated treatment is often needed to rid a home of fleas.

There are lots of folk remedies out there for preventing and treating fleas but none of them have shown to work. Orange oil, brewers yeast and garlic will not repel or treat fleas on pets, and they could be harmful, Hinkle said.

It’s best to work within the scientific canon of chemicals that have been scientifically proven to work and find the right one for each situation. UGA Cooperative Extension county offices and local veterinarians may have recommendations for what works best in different parts of the state.

Topical liquids that are applied to the skin, like Frontline, are popular and effective preventatives for dogs and cats but can be less effective for dogs that are bathed often.

Oral preventatives — like Capstar and Trifexis — are also good options.

Flea collars that contain imidacloprid and flumethrin are also very effective but not all the flea collars contain these ingredients and not all are created equally, Hinkle cautioned.

The most important guideline for any product is to read every label and follow the instructions, Hinkle said. Species and size specifications should be followed at all times. Even the most commonplace chemicals can be deadly to pets if used the wrong way.

Getting rid of fleas

In addition to pesticides, frequent vacuuming of the areas where pets hang out is a crucial tactic in battling fleas. Whether it’s a pet bed, a couch or just a favorite corner in the living room or perch on a bookshelf, pet owners need to repeatedly vacuum the areas where the pets hang out. Vacuuming often can remove the flea eggs and pupae from the home before they emerge as adult fleas.

“The most diligent housekeepers may be able to vacuum often enough to remove the flea eggs and pupae from their homes before adult fleas emerge, but many of us aren’t that diligent,” she added.

So, vacuuming is an important tactic but pet owners shouldn’t feel bad if it’s not enough.

In the yard, keeping brush cut back and keeping wildlife out of the yard will help keep flea populations in check.

“Look for places that are shaded, where the air is still, and there is relatively high humidity,” Hinkle said. “If your dog likes to nap under the porch during the summer, that’s where fleas are going to be. Don’t waste your money spraying the whole yard. Fleas can’t live in the grass.”

No matter where you’re seeing fleas, the key to keeping fleas in check is to start early before populations get out of hand. UGA Extension has the information pet owners need to act early at extension.uga.edu or by calling 1-800-Ask-UGA1. 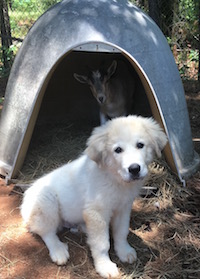 CAES News
How some beneficial insects use viruses to protect their young Posted on 05/03/22 by Michele Hatcher
Inheriting a virus may sound like an undesirable bequest, but for certain insects, the phenomenon of beneficial virus inheritance is key to their survival. In the case of certain parasitoid wasps, viruses not only help these beneficial insects survive, they eliminate many agricultural pests in the process.
Subscribe for Updates