Researchers project that Georgia’s cotton farmers will plant more than 1.45 million acres this year, an increase from 1.28 million acres in 2017, according to Jared Whitaker, University of Georgia Cooperative Extension cotton agronomist.

Farmers plant cotton this month, and prices have increased due to increased demand and strong U.S. exports. The UGA Cotton Team believes that farmers can expect to price a portion of this year’s crop between 72 and 75 cents per pound.

“There’s a fair amount of optimism from the farmers I’ve talked with this year compared to the last couple of years. Yields have decreased because of things out of our control, like weather and insects, namely whiteflies, but we hope that’s not the case this year,” Whitaker said. “Prices have improved, which should encourage our farmers.”

Silverleaf whiteflies and Hurricane Irma dampened cotton farmers’ spirits a year ago. An unprecedented outbreak of whiteflies in Georgia in 2017 forced many producers to treat for the pest for the first time.

Whiteflies are tiny, winged insects found on the underside of leaves. They leave behind a sticky substance, called honeydew, that prevents plants from conducting photosynthesis.

“Historically, less than 20 percent of our crop even deals with silverleaf whiteflies,” Whitaker said. “If we see problems again this year, it will cost growers money, but many will be better prepared to make treatment decisions.”

The arrival of Irma in early September 2017 damaged most Georgia cotton fields, especially those that were affected close to harvest time.

“We obviously want good soil moisture throughout the growing season, but we don’t want big storms that bring excessive rainfall and tremendous winds that damage yields,” Whitaker said. “Storms can be a blessing at times, but we don’t need another Irma.”

Whitaker advises farmers to make timely production decisions and pay attention to how and where they spend their money.

“I want our growers to set realistic goals with respect to yields because growing cotton can be costly,” he said. “We want to make a lot of cotton, but also be profitable doing it.”

Georgia remains the second-largest cotton-producing state in the U.S., second only to Texas. According to the UGA Center for Agribusiness and Economic Development, Georgia’s farm gate value for cotton in 2016 was nearly $967.7 million.

Julie Jernigan is an intern at UGA-Tifton. 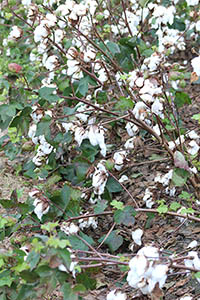