UGA researchers travel Down Under to collect raspberry and peach seeds

University of Georgia horticulturists Rachel Itle and Dario Chavez recently spent a busy two weeks in Australia collecting seeds from wild raspberries and peaches to bring back to the UGA Griffin campus.

As scientists in the College of Agricultural and Environmental Sciences (CAES), Itle and Chavez research Georgia-grown fruit. Itle works with blueberries and Chavez focuses on peaches. They will use this collection of seeds from Australia to breed new varieties of raspberries and peaches specifically for Georgia and the Southeast U.S.

They traveled to Queensland, Australia, in South Wales on international travel grants provided by the CAES Office of Global Programs.

Itle collected wild raspberry seeds. She had to “calibrate” her eyes in her search for the tiny, red berries, which made finding them easier, but the wild berries were not plentiful.

“It was late spring, early summer in Australia when we traveled, so the raspberries were ripe. Some were bright red, some dull red and some golden,” she said. “The fruit size was about a half or a fourth the size of the commercial berries we have in the U.S. I wanted to eat some, but I couldn’t justify it because we drove for miles and only collected a few berries at each location.”

Itle was able to collect about 100 seeds from each berry and a few hundred from each wild specimen, collecting 16 Rubus specimens in total. She hopes to cross the plants that grow from these berries with common raspberry varieties grown in the U.S. to create varieties that can be grown by Georgia farmers.

“We don’t really have a commercial raspberry that is suitable for Georgia. They get too many diseases, and they are especially susceptible to viruses,” she said. “The first step will be to grow the seeds, screen the plant material for pathogens and see what survives. If it can be grown here with the disease pressures we have, we can breed that disease resistance into commercial varieties.”

Chavez was on a similar mission to collect seeds from wild peaches.

“These peaches were brought to Australia by the Chinese when they were there building the railroads. They brought peaches from China and threw down the pits, which became trees,” he said. “(The trees) colonized along small rivers and creeks.”

These peach trees produce small, white-fleshed fruit with “a good fragrance and aroma,” he said.

He collected fruit, removed the seeds and brought them home to the U.S. He also collected budwood, or fruiting branches that contain buds meant for grafting onto the rootstock of another plant, that he later used in Australia with his collaborator, Australian researcher Bruce Topp of the Queensland Alliance for Agriculture and Food Innovation. Chavez used the budwood he collected to graft trees that will grow in Topp’s program and be used to obtain more seeds, which will be used in future crosses to create new, hybrid varieties.

“We could bring the seeds back to the U.S., but we were not allowed to bring plant material,” said Chavez, who returned to UGA-Griffin with 80 seeds that are now sprouting in his greenhouse.

The UGA research team worked together to collect specimens and planned each day in Australia to make the most of their time. Planning was made easier by a map of Australia’s living plant species, which included GPS coordinates. To take advantage of the early Australian sunrise, their days began at 5:30 a.m. and ended around 10 p.m.

“We were able to cover a giant chunk of a region in one day until the sun went down at around 6 p.m. Then we had to keep driving until we got close to the next collection site, where he looked for a hotel. Each night we planned our next day, mapping coordinates for the various species. It was a very exhausting trip, but it was so much fun too,” Itle said. “We had to hike to many of the spots. Sometimes we hiked to a spot and never found any plant material; others were right by the highways.”

Fruit tree breeder Jose Chaparro of the University of Florida accompanied Itle and Chavez. He collected seeds from wild relatives of peaches and citrus fruits. The researchers also toured the macadamia nut-, strawberry- and apple-breeding programs at the University of Queensland Maroochy Research Facility.

The collection trip was a major first step in the UGA scientists’ breeding efforts, but consumers won’t be enjoying the literal fruits of their labor anytime soon.

“The varieties we breed are for potential markets in the future, but that will take 10 to 15 years,” Chavez said. “All perennial fruit crops take that long to breed, but we can speed it up a bit by using molecular tools, if possible.” 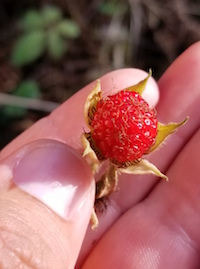 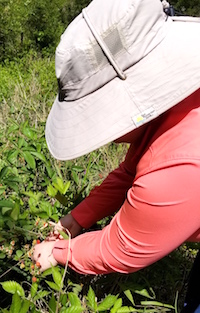 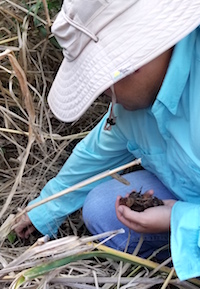