Native azaleas are very different from their traditional Southern cousins

University of Georgia plant breeder Carol Robacker has studied azaleas for the past 25 years. She and her research technicians, Allen Byous and Sherrod Baden, have learned a lot about one of the South’s most popular flowers.

A scientist with the UGA College of Agricultural and Environmental Sciences (CAES), Robacker breeds new landscape plants that are genetically adapted to survive and thrive in the heat and drought stress of Georgia’s urban conditions. Robacker works with CAES entomologist Kris Braman to breed native azalea plants that can tolerate azalea lace bugs, a major pest of azaleas.

Evergreen azalea flowers come in a wide variety of forms, and the most common is single-petal. Native azaleas typically have tubular flowers with long stamens that extend beyond their petals.

“There are more than 17 species of native azaleas. We collected a number of these that grow in the Piedmont (region) and are now evaluating which ones are adapted to Georgia,” said Robacker.

The Research and Education Garden on the UGA Griffin campus is filled with row after row of her research plots. In Robacker’s laboratory and greenhouse at UGA-Griffin, Byous and Baden tend the plants and record any insects and diseases that affect them.

“First, when you buy an azalea, turn the pot upside down. Gently remove the plant from the pot and examine the roots. If the roots are light brown and the pot is fairly full of healthy-looking roots, you’re good. If they are black, don’t buy it,” Byous said.

When it comes to site selection, pick a spot that gets both sun and shade, Byous said. Azaleas need sunlight to develop flower buds and flowers, but most azalea varieties perform better in the shade, which protects them from extreme heat in summer.

“A 50-50 mix of sun and shade makes for a good compromise for most varieties,” he said.

Look closely at the soil. Azaleas don’t like wet, boggy areas, and native azaleas especially like well-drained soil, Byous said. Azaleas also like an acidic soil with a pH in the 4.5 to 6.0 range.

When you are ready to plant, dig a hole 4 inches larger than the pot. “Break up the root ball, scar the inside of the hole so the roots can spread and place the plant 2 inches higher than soil level so it drains well,” he said.

Add pine bark or shredded leaves as mulch to insulate the plant and keep the weeds down.

Water the new azalea plant heavily for the first two years and fertilize in the spring with a slow-release fertilizer similar to a 19-5-8 fertilizer blend.

Native azaleas typically aren’t pruned, but if you choose to prune, do so after they bloom and before the new buds set the following spring.

“You don’t have to prune them, but you may want to if they grow outside the area where you planted them,” said Robacker. “But please don’t try to create a meatball shape. Natives aren’t meant to be shaped like that.”

Over her 37-year career at UGA-Griffin, Baden has developed a dark green thumb. Her advice to azalea lovers is simple: Don’t move them once they are established.

“If you want an azalea in another area of your yard, take cuttings from your azaleas and root new plants,” she said.

To do this, select shoots that are about 6 inches long. Snap the branch to remove a cutting. Place the cutting in a plastic bag with a damp paper towel and label the bag.

“Keep the bag out of the sun. Put the bag of cuttings in the refrigerator overnight,” she said.

The next day, trim the cuttings from the bottom to create a 4- to 6-inch cutting. Remove all the leaves except the top pair, and trim these by about half to reduce plant stress.

“Wound about a half-inch of the lower stem of the cutting by scraping the surface with a sharp knife. Dip the cuttings in a rooting hormone of your choice, liquid or powder,” Baden said. “Stick cuttings in a mix of milled sphagnum moss and coarse perlite mixed 1-1.”

Place the cuttings in light shade under an automatic misting system to keep them moist for several weeks.

“If you don’t have an automatic system, create a humidity dome out of a plastic shoe box or corsage box. Gradually open the box over a few weeks to decrease the humidity and allow the cuttings to adapt to the drier air,” she said.

After several weeks, the cuttings should have roots. Allow the newly rooted cuttings to grow undisturbed their first season. Cuttings must overwinter in a protected, cold environment and go dormant. Newly rooted azalea cuttings should bloom two years after being established. 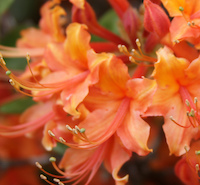