On Valentine’s Day, the demand for cut flowers, especially for roses, is high. This year, Keith Fielder, University of Georgia Cooperative Extension agent and rose grower, suggests giving a rose plant along with those fresh cut roses so your sweetheart can enjoy roses almost year-round.

“Buy your sweetie a nice, dozen, cut roses, and then give her a few bare root roses that the two of you can plant together,” said Fielder. “Once you plant them, you can enjoy the roses together year after year.”

Fielder began his garden with six varieties of roses and has now grown upwards of 25 different rose varieties over the past 28 years with the help of his wife, Roseanne.

“Part of the fun of growing roses is sitting down and going through a catalog together to decide what you want to plant together,” he said.

If you want to grow long-stem roses that work well in cut floral arrangements, Fielder recommends hybrid tea roses, which tend to be fragrant. If your goal is a flower that stays pretty for an extended period of time, he suggests buying a cutting rose, but warns that they put off very little fragrance. Fielder’s favorite red cutting rose variety is ‘Mr. Lincoln.’

“It’s has been around a long time and rose snobs will probably throw rocks at me for saying that I love it. It’s a really pretty red rose, it’s a nice plant, and my mom has one in her yard that is 18 years old and still flowering,” he said. “She puts some mulch around it, throws some 10-10-10 fertilizer on it once in a while and then cuts flowers off of it. ‘Mr. Lincoln’ is one I have had a lot of luck with, and the older roses are a lot less expensive.”

Beyond the traditional red, roses now come in a plethora of colors. Fielder recommends ‘Tropicana,’ an orange rose; ‘St. Patrick,’ a yellow rose with a green tinge around the petals’ edges; ‘Joseph’s coat,’ a climbing rose that produces a mix of pink, mauve and red roses; and ‘Cecile Brunner,’ a pink rose.

Fielder suggests buying bare root roses from a reputable producer. The ones typically sold in bags embossed with a photo of the rose on the front are OK, but avoid the ones dipped in wax and be very picky in your selection. Look for ones that are still dormant with robust canes.

“Bare root roses look like sticks with roots when you buy them. They are actually rose plants that have been grafted onto rootstock and then cut back,” he said. “They are typically shipped from January through March and are the most economical way to buy roses. Plant them by mid-March at the latest and they will establish roots.”

Novice rose growers should start small and plant one to two roses in a site that gets six to eight hours of strong sunlight from morning until afternoon, Fielder said. Plant them at least six feet apart in soil that is fertile, but not wet.

“Roses don’t like to have wet feet,” he said. “And the air flow can’t be restricted. When I go out and visit homeowners who have problems growing roses, I normally find the roses planted two to three feet apart. That’s way too close together.”

In addition to being beautiful and coming in a wide variety of colors, Fielder says he finds roses “remarkably relaxing.”

“My wife and I take a peek at them after work and it’s a great decompression device for us. We have also gone out at the break of dawn to see what’s blooming,” he said. “She loves to cut them and take some to work with her.” 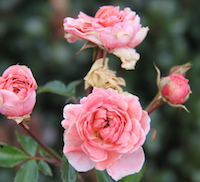