By Sara Freeland for CAES News

The University of Georgia connects military veterans to farming through Farm Again, a program that assists farmers who have chronic health conditions and disabilities.

Farm Again provides a wide variety of services, including one-on-one technical assistance and resources for adapting farming tasks to make them easier.

"We've really seen an influx of veterans into our programs over the last four years, most in the last year," said Rebecca Brightwell, associate director of the university’s Institute on Human Development and Disability (IHDD) and a public service faculty member in the College of Family and Consumer Sciences (FACS).

"Farming is a really good fit for veterans. They're used to hard work," she said. "They want to stay busy from the time they get up until they go to bed. They want to continue to be of service. They want to serve our nation. And they're looking for that next mission in life. And what a noble cause, to feed our nation."

More than 22 percent of Georgia veterans have some type of disability, she said. That number may be greater as some veterans may have undiagnosed disabilities.

Tim Anderson of Warner Robins, Georgia, is a 17-year veteran who served in Bosnia-Herzegovina. He grew up on his grandparents' farm near Baltimore. After losing a leg in a motorcycle accident following his military career, he decided to try his hand at growing vegetables.

For the last three years, he's been working with UGA's Farm Again program to grow his backyard garden into a full-size farm. Currently he grows organic broccoli, rainbow carrots, garlic and Brussels sprouts in raised beds. He sells his produce at the farmers market.

Anderson recently attended a produce food safety workshop held by UGA Cooperative Extension in Watkinsville, Georgia. He and 14 others learned about topics such as water runoff and contaminants that may impact crops. He's now working out the logistics of growing organic oyster mushrooms in a greenhouse.

With UGA Extension workshops, he said he is "always learning. You have to learn so much." He plans to take as many workshops as UGA Extension offers.

Chris Dorsey, an IHDD program coordinator, teaches the veterans farming classes. Dorsey grew up on a small farm and, after returning from Iraq in 2004, he turned back to farming.

"Unknowingly, I was using farming and gardening as a therapeutic tool," he said.

He turned his Dahlonega, Georgia, farm into a healing farm for veterans. This summer, Dorsey joined UGA's staff to teach classes to veterans.

"We're using agriculture as a therapeutic and educational tool to help (veterans) get their lives back on track," he said.

The dual-purpose workshops teach veterans about farming and help them find a network of support.

"We had this brotherhood and sisterhood when we served," Dorsey said. "We get out (of the military), and we lose that. So we're trying to form this network of veteran farmers across the Southeast who have each other's backs again. Anything you need, whether it's information (or there’s) something you don't know, we have this network, you can reach out. Or if we need help harvesting a crop, having this network of veteran farmers nearby can be a big help."

The Farm Again program offers a series of workshops that can aid veterans. These cover safely producing food, Tractors 101, Soil 101, applying for U.S. Department of Agriculture loans, selling at the farmers market and growing organically. Many of these workshops are open to the public, but target veterans and underserved farmers.

The project's website, www.farmagain.com, features the upcoming workshop schedule and other resources.

The Farm Again program is managed by UGA Extension through the College of Agricultural and Environmental Sciences and IHDD through FACS.

Sara Freeland is a public relations coordinator in the University of Georgia Division of Marketing and Communications.
Authors:
Sara Freeland
Experts/Sources:
Becky Brightwell 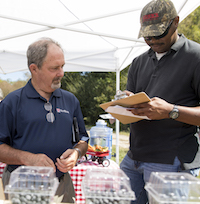 CAES News
Examining issues facing hemp production and processing Posted on 01/19/21 by Allison Ruth Fortner
Hemp is a promising new industry for profitability, but growers of this newly legal crop will face a mix of public opinions according to University of Georgia research into challenges those in the hemp business may face in the southeastern United States.
Subscribe for Updates