As Georgia Vidalia onion producers plant next year’s crop, they are transplanting the onions, or physically placing the plants into a hole dug in the ground. Farmers may soon be using a new method that literally rolls the plants into the soil.

PlantTape technology could make planting by hand a thing of the past, according to Cliff Riner, University of Georgia Cooperative Extension area agent for Vidalia onions.

“The way we currently plant our onions is all by hand. It’s very primitive. We have to hand pull the onions and then we have to transplant them. It’s very costly to the producer to have to pay for that much labor,” Riner said. “With a machine like this that utilizes PlantTape, you have a lot more options. You’re a lot more accurate and it’s also easier on the producer in terms of labor.”

“Our goal is, in one year, to learn as much as possible so we can share that information with the producers,” Riner said. “This is a huge investment from the (PlantTape) company and the Vidalia Onion Committee.”

According to the PlantTape website, the tape is made of peat moss and vermiculite, a mineral that expands when heated, between two layers of biodegradable tape material. The trays of tape are created and seeds are planted in a PlantTape sowing line. Every six seconds, 630 seeds are dropped from a seeder into a premade hole in the tape. The tape material holds the seeds in place.

Once in the trays, the seeded tape can be stored or wetted to start the germination process. If desired, trays can be stored for a later planting date as long as they remain dry.

After germinating in a nursery, the seedlings develop normally in the plant pockets of the tape. What’s unique is that the plants can be transplanted at any stage of development, from a couple of days after germination to a fully grown seedling plant.

Brian Antle, president of PlantTape, says the equipment has been used to plant lettuce, romaine, broccoli and cauliflower in California. In previous plantings, the machine reduced labor by 80 percent and usually covered twice as much ground.

Using PlantTape, a normal 16-person transplanting crew could be reduced to a crew of three. One tractor driver and two workers are required to change out trays on the machine as it moves down the field.

The Vidalia Onion Committee is funding the UGA research on PlantTape because it sees the potential in decreasing a substantial burden on onion production, said Bob Stafford, committee manager.

“Our work is very labor intensive, so anything we can do to cut down on the labor is what we’re after,” Stafford said. “We support (UGA) very strongly. Research is the future of our industry. Everything we can do through the Vidalia Onion Committee, through funding or support, we’re all in.”

The PlantTape machine is equipped to fit all type of row patterns and can be modified to plant up to eight rows at a time. UGA researchers are using it to plant four rows.

Local farmers and industry leaders witnessed the machine at work in a field operated by Generation Farms in Toombs County, Georgia, on Nov. 15. Riner estimated that they would operate another planting about three weeks later to compare different planting dates.

The only downside to this new technology is its cost. Antle estimates that the machine costs anywhere between $100,000 and $200,000, depending on its configuration, along with the cost of the tape.

“This way of doing it is going to be more expensive because there are just so many different odds and ends to make it work. I think over time, however, now that we’ve got everybody showing interest in it and working to try to make it work, we’re going to find ways to drive costs down,” Georgia farmer Aries Haygood said.

Georgia’s onion industry leaders laud the reduced personnel required to operate the PlantTape machine and think that, over time, the tape system will be worth the investment.

“We’re all used to hand labor and having to put the plants in a hole. It’s a long, drawn-out process,” Haygood said. “Labor is becoming more of a challenge, not only to get it in a timely manner but also for it to be efficient and affordable." 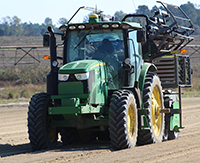