If the world’s going to double its food supply by 2050, it’s not going to happen without genetically modified crops.

That was the hard-line taken by molecular biologist Nina Fedoroff at the University of Georgia College of Agricultural and Environmental Sciences' (CAES) signature D.W. Brooks Lecture on Nov. 7, 2017.

Fedoroff, who was a pioneering biotechnologist at Pennsylvania State University before becoming a science advisor to the U.S. Department of State, the U.S. Agency for International Development (USAID) and founder of the Director of the Center for Desert Agriculture in Saudi Arabia, has long been a proponent of biotechnology in agriculture. Lack of support for genetically modified organisms (GMOs) is based on fear of new technology and science denial, she told a crowd of more than 350.

“All of the indicators suggest that we’re reaching the limits of the world’s land and water resources, yet the population is still growing,” Fedoroff said. “We’re also becoming increasingly aware that we’re going to have to produce food more sustainable than we ever have before if we’re going leave the land in reasonable condition for those who follow us … The answer lies in a combination of technology and biology.”

Part of that solution is going to have to be genetically modified crops that are bred to be more disease-, drought- and heat-tolerant to cope with climate change while increasing yields.

Fedoroff’s talk was part of the D.W. Brooks Lecture series, which was launched in 1976 in honor of Georgia agricultural pioneer D.W. Brooks. Brooks taught at CAES at both the beginning and the end of his career. He holds the distinction of being both the youngest and oldest person to ever hold a faculty appointment in the college.

Outside of UGA, Brooks founded Gold Kist, which started as the farmers cooperative Cotton Producers Association during the Great Depression and has grown to be one of the largest poultry companies in the world.

Each year, the D.W. Brooks Lecture focuses on a different perspective of food security and the role of international agricultural development and science in meeting the growing demand for food.

Fedoroff challenged this year’s audience to look at the facts surrounding genetically modified plants to try to separate those facts from the fear of new technology. People have often been scared of new technologies, she said, but the consequences of technophobia have never been so grave as it is in the case of the fear of genetically modified food.

“I hope that I’ve shown you that the societal controversies and regulatory tangles and our ability to resolve them have grave consequences for our ability to feed the 10 billion humans that we expect will be clamoring for food in the not-so-distant future,” she concluded. “The fact is that what people believes really matters …

“So will we continue to ignore facts and cling to our fear-based beliefs or will we have the wisdom to embrace the scientific advances we will need to provide everyone with enough to eat even as the climate continues to change.”

In addition to Fedoroff’s talk, the event was also a chance for CAES to recognize some of the best work being done inside the college’s classrooms, laboratories, experiment stations and UGA Extension offices.

“They represent truly the best of the best,” CAES Dean and Director Sam Pardue told the crowd at the lecture. “I’m always amazed at the breadth of work that the men and women in this college do on a daily basis, and the impact we have across the state and the nation and around the world.”

For more information about the D.W. Brooks Awards and this year’s award winners please visit www.caes.uga.edu/about/signature-events/dw-brooks.html. To watch the lecture, visit www.youtube.com/watch?v=w2MKkmbcZwo. 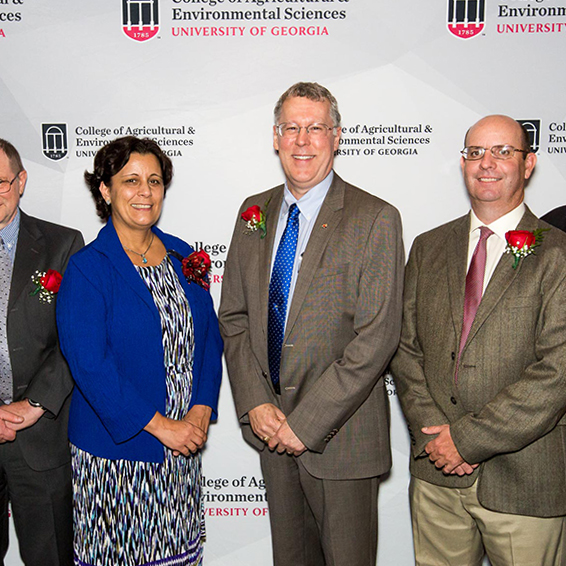