UGA mycologists partner with the CDC to tackle fungicide resistance

There are a limited number of compounds available to combat fungal infections in both plants and people. A team of University of Georgia researchers is helping to assess the risk posed by fungi developing widespread resistance to the stable of antifungal compounds used in the United States.

Michelle Momany, professor in the UGA Franklin College of Arts and Sciences Department of Plant Biology, and Marin Brewer, associate professor in the UGA College of Agricultural and Environmental Sciences Department of Plant Pathology, recently received a $197,798 contract from the Centers for Disease Control and Prevention (CDC) to study antifungal resistance in agricultural settings.

For people with healthy immune systems, fungal infections — the ones that can cause problems like athlete’s foot or ringworm — are annoying, but easily treatable with medicines containing azole antifungal compounds. For people with compromised immune systems, fungal infections can be deadly, and azoles are essential, live-saving drugs. These compounds are also used to protect crops from fungi that cause plant diseases or produce deadly and carcinogenic fungal toxins in food and feed.

Despite these powerful compounds, fungal infections kill about 1.5 million people each year, and almost all have immune systems diminished by chemotherapy or underlying disease. Fungal diseases also wipe out about one-third of the world’s harvest of staple crops, like rice, wheat and corn.

The CDC contract, announced Oct. 23, will allow Momany and Brewer to focus on the Aspergillus fungus, which can cause serious lung infections in people with compromised immune systems and serious crop losses in staple crops, including peanuts, corn, cotton, onions and tree nuts.

“Most people are surprised to learn that fungi are more closely related to animals than they are to plants,” Momany said. “This close relationship makes it hard to identify drug targets in fungi that don’t exist in humans. That’s part of why we have very few good antifungals that don’t also cause terrible side effects in humans. We can’t afford to lose any of the few good antifungals we have.”

Both Brewer and Momany are members of UGA’s interdisciplinary Fungal Biology Group. For more information about research into fungi at UGA, visit http://research.franklin.uga.edu/fungi/fungi/fungi/. 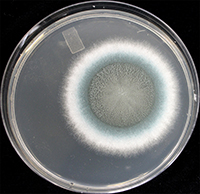