Conservation tillage saves farmers time and money and improves the soil, but only 20 or 30 percent of Georgia farmers use this system, according to University of Georgia Cooperative Extension soils and fertility specialist Glen Harris.

“More farmers don’t switch to conservation tillage because they’ve always used conventional tillage,” Harris said. “Farmers are worried about a yield drag and putting money into new equipment. But again, in the long run, I think conservation tillage is probably one of the best things we can do. It’s only called ‘conventional tillage’ because it’s what's being done most frequently.”

A conservation tillage system begins with a cover crop, like rye or cotton, that’s planted during fallow times of the year, such as late fall and early winter when row crops have been harvested. The cover crop is killed prior to the planting of next year’s summer crop.

If farmers maintain this system, the plant residue from the cover crop builds organic matter in the soil over time, which leads to reduced erosion and added nutrients in the soil.

Harris describes conservation tillage as minimal tillage with less soil disruption. Farmers apply all of the fertilizer and lime on the surface and do not deeply turn the soil. Farmers who use conservation tillage systems might only dig a few inches into the ground for a soil sample, rather than the typical 8 or 9 inches associated with conventional tillage, to determine the soil’s fertilizer needs.

“(Conservation tillage) helps hold in the nutrients that we’re putting down, and it can also help to hold water, which can be very important around here,” he said.

Conservation tillage requires different equipment. Instead of using deep-turning plows or harrows, farmers use a strip-tillage rig, and they have to learn how to farm with it, Harris said. However, once the switch is made, growers save money and time because they make fewer trips across the field.

Increased herbicide use may call for increased spending, but that depends on the weeds the conditions for the year, according to Harris.

“A lot of people think you can’t make comparable yields using conservation tillage, but I think you can. Sometimes you don’t make them right away just because you’re learning a new system,” Harris said. “Yields can be, in my opinion, just as good.”

Julia Rodriquez was an intern for UGA-Tifton. 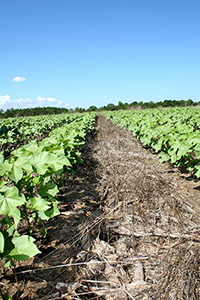 CAES News
UGA researchers evaluate the benefits of cover crops, living mulches in Georgia cotton 01/06/22 Maria M. Lameiras
For most row crop producers in Georgia, corn, cotton and peanut are planted in the spring and harvested in late fall. After harvest, the ground is left relatively bare, with the residue of the harvested crop the only organic material left on the ground. This is where cover crops come in.

CAES News
Incorporating alfalfa in forage systems could lead to environmental benefits 12/09/21 Maria M. Lameiras
Alfalfa, once a dominant forage in Georgia, is the third-highest crop for economic returns in the United States. Combined with cheap nitrogen prices, difficulty growing the desirable forage crop in Georgia’s challenging climate led to a decline in alfalfa production in the state after its peak in the 1960s.

CAES News
Cover crops provide habitat for predator insects that may help control pests 09/29/21 Maria M. Lameiras
The use of cover crops has risen among both traditional and organic producers for a variety of reasons — to control erosion, choke out weeds, improve soil health and enhance water availability. Now research by University of Georgia scientists is examining which cover crops also may provide important habitat for predatory insects that could help control disease- and damage-causing pests in cotton.

CAES News
UGA researchers target new virus threatening cotton crops 08/12/21 Maria M. Lameiras
While aphids aren’t a direct threat to cotton plants, they can carry a persistent virus that is difficult to control and can cause significant losses in one of Georgia’s most important crops.
Subscribe for Updates