Study abroad opportunities abound for every major and interest in CAES

A semester abroad program didn’t seem likely for Alyssa Beckstead. As a University of Georgia College of Agricultural and Environmental Sciences (CAES) biological science major with a goal of graduating in three years, Beckstead thought it would be impossible to find courses at an international university that applied to her major and allowed her to stay on track for graduation.

But last fall, Beckstead knew she needed a change.

“I went to see Amanda Stephens (the CAES director of experiential learning) to see if there was any possibility I could study abroad,” Beckstead said. “My grandfather is originally from Berlin and I studied German in high school, so I always wanted to go to Germany. Amanda showed me the exchange program for the University of Hohenheim for the next semester, I was able to get the Baden-Württemberg Scholarship, and everything just fell into place.”

Knowing she wouldn’t return to the U.S. until July, Beckstead worked full time from December 2016 until she left for Germany in March.

“I earned as much, or more, money than I would have working in the summer,” she said.

Beckstead arrived at the University of Hohenheim in March. She spent her first month in an intensive German class and learned her way around the campus, which includes a main building that was originally built in the 18th century as a palace.

In April, she began her classes at the University of Hohenheim, which were taught in English. Ultimately, she earned 12 hours of academic credit, all of which applied toward her UGA undergraduate degree.

Located just 15 minutes outside the city of Stuttgart, Germany, the University of Hohenheim is a renowned agricultural institute. In 2017, it ranked ninth in U.S. News and World Report’s “Best Global Universities for Agricultural Sciences.”

During her stay, Beckstead lived in a residence on campus with mostly German roommates, which gave her a chance to practice her language skills. However, she said, she made friends with students from several countries, including the Netherlands, Spain, France, Romania, Croatia and Denmark.

“I was the only American exchange student for my semester,” she said. “I came in knowing no one and not knowing what to expect.”

Courses in Germany are taught quite differently than what Beckstead experienced in the U.S.

“Your only grade is your final,” she said. “You’re responsible for keeping up on your own. It’s your own decision whether to attend class and how you study during the semester. The final tests were a mix of types. One was an oral exam with my professor. Another was all short answer and the third was a mix.”

While she did focus on her classes, Beckstead also found time to go hiking with friends and to visit Switzerland, the Netherlands and other parts of Germany.

Since returning, Beckstead maintains her appreciation for good bread and, rather than driving her car around town, now prefers biking or catching a bus if possible.

“The funniest thing is that I haven’t been able to switch back to the Fahrenheit scale,” she said. “In Germany, I had to figure out the Celsius scale and I just can’t seem to go back.”

In addition to keeping in touch with her international friends, Beckstead has begun making friends through the new CAES Adopt an Ag Dawg buddy program, which pairs local CAES students with those from other countries. Currently, she is paired with a student from Switzerland.

As she contemplates graduating in May 2018, Beckstead juggles multiple plans. Although she plans to work in patient care in anticipation of beginning a physician’s assistant program, she also hopes to return to Europe.

For UGA students interested in participating in an exchange program, Beckstead emphasizes the importance of meeting with an advisor like Amanda Stephens, who works in experiential learning.

“I think science majors especially worry that it’s impossible to study abroad. You worry about whether you can afford it or what it will do to your class schedule,” she said. “But there are so many ways to make it happen! If you meet with an advisor and talk about your situation, she can help you find something that will work.”

The exchange program at the University of Hohenheim, for example, includes the opportunity to apply for the $2,500 Baden-Württemberg Scholarship to help cover housing and other expenses. In addition, students can use their HOPE or Zell Miller scholarships to cover their UGA tuition.

Information on these programs will be available at the CAES Study Abroad Fair on Wednesday, Oct. 11, from 10 a.m. to 1 p.m. at the Tate Student Center. 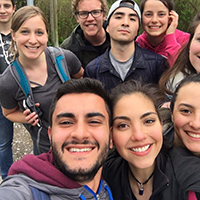 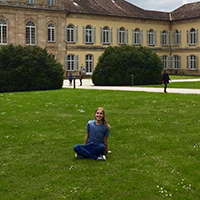