A global team of 65 scientists, including nine from the University of Georgia, have decoded some of the secrets to the crop’s coping strategies. The newly sequenced and decoded pearl millet genome, published Sept. 18 in the journal Nature Biotechnology, will help crop breeders create more drought-tolerant millet and develop climate adaptation strategies in other important cereal crops.

This research used the latest innovations in DNA sequencing and analysis to identify new genetic tools, like molecular markers related to drought and heat tolerance, as well as other important traits, such as nutritional quality and pest resistance.

“A hundred million people depend on pearl millet,” said Jason Wallace, of UGA’s Department of Crop and Soil Sciences. “It can grow right up to the edge of the Sahara desert. Understanding its genome will help us turn that information into better crops for them and for us.”

Pearl millet is grown on about 66.7 million acres worldwide and is a daily staple for more than 90 million people, many of whom are among the most vulnerable in arid and semiarid Africa and Asia. It is also an important source of animal feed and forage for millions of farms.

However, pearl millet yields have remained low over the last six decades, as this cereal is primarily grown in poor soil conditions without irrigation and minimal to no fertilizer or other agricultural inputs.

Investment in genetic research for this smallholder crop has been limited, and breeders have had limited genetic information to develop high-yielding, superior varieties and hybrids that respond to farmers’ constraints.

This pearl millet genome research has led to a better understanding of its genetic variability. Researchers have identified candidate genes for very important traits, such as resistance to downy mildew, a very damaging millet disease, and pearl millet’s exceptional heat tolerance.

“Most cereals, like rice or maize, cannot support temperatures over 30 to a maximum 35 degrees Celsius (85 to 95 degrees Fahrenheit) when they start forming their grain, whereas pearl millet will fill its grain in air temperatures of up to 42 degrees (C) (107 F),” said Professor Rajeev Varshney of ICRISAT, who coordinated the International Pearl Millet Genome Sequencing Consortium. “We have found that, compared to other cereals like wheat, rice or maize, pearl millet has a more diverse repertoire of genes for natural wax proteins, which act as thermal protection for the plant.”

Such heat resistance is crucial as climate experts forecast further heat waves in years to come. Understanding the basis of pearl millet’s heat and drought tolerance could also help improve these traits in other crops, either by advanced breeding or biotechnology.

The team’s publication on the pearl millet genome can be found at www.nature.com/nbt/journal/vaop/ncurrent/full/nbt.3943.html . Details about this research are available at ceg.icrisat.org/ipmgsc/.

(The staff of the International Crops Research Institute for the Semi-Arid Tropics contributed to this release.) 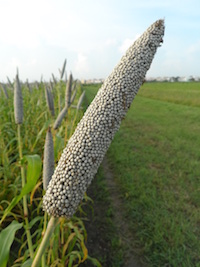 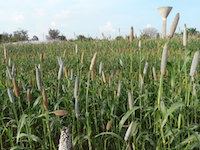