As a first-generation college graduate, Susana Ferreira understands the benefits of earning a degree. The associate professor of agricultural and applied economics also knows that studying in another country can be life-changing.

“I’m a firm believer in the benefits of studying abroad and I truly welcomed the University of Georgia’s experiential learning initiative,” Ferreira said. “Ten years from now, a student may not remember much from a course they took, but they will remember having studied abroad.”

When Ferreira was earning her bachelor’s degree from the Universidad Publica de Navarra (UPNA) in her hometown of Pamplona, Spain, she didn’t participate in a formal study abroad program. However, she was able to spend three months in Colombia as a result of a program offered through the Spanish Agency for International Development Cooperation.

“That experience changed my outlook, it opened my eyes,” she said. “I loved everything about Colombia — the food, the music, the people.”

That initial experience living abroad also gave Ferreira the confidence to pursue other opportunities, including attending the University of California San Diego, where she earned her master’s degree and her doctorate in economics.

“When I came to the United States, it was a unique opportunity,” she said. “I had no idea about being a graduate student, but the dean of my department had a vision for internationalizing our program by sending the best students abroad for graduate school.”

After completing her graduate degrees, Ferreira continued her international travels, including a five-year term on the faculty of University College Dublin, in Ireland, and a brief stint as a visiting professor at Bethlehem University in Palestine.

Ferreira was surprised, however, when she arrived at UGA in 2012 and discovered there were no semester-long student exchange programs with any universities in Spain, much less a program in Pamplona, which is famous for its running of the bulls each July.

The city serves as the capital of Spain’s Navarra region and is located in the foothills of the Pyrenees, just north of La Rioja, Spain’s most famous wine region. With its mild climate, Pamplona is considered an enchanting city year-round, with a beautiful medieval center, delicious food and plenty of parks.

“The Universidad Publica de Navarra has exchanges with 300 universities in 50 countries,” Ferreira said of her hometown university’s commitment to international study programs. “I decided it would be beneficial if UGA could establish a partnership there.”

Ferreira began working on the exchange program two years ago, drawing on connections she already had in Pamplona and establishing new relationships as plans began to gel. A faculty travel grant awarded by the UGA College of Agricultural and Environmental Sciences Office of Global Programs allowed her to spend May and June of 2016 at UPNA, advancing her research and working out details for the program.

“The exchange program is housed in the School of Economics and Business Administration at UPNA because they already have an international business degree program that requires students to complete a yearlong study abroad program and to take 75 percent of their credit hours in courses taught in English,” she said. “That makes it very easy for UGA students to take courses in English if they prefer, although they can take courses in Spanish, also.”

An added benefit for UGA students — besides paying UGA in-state tuition and fees that can be covered with HOPE and Zell Miller scholarships — is the availability of Erasmus-Plus funding. This scholarship program is funded by the European Union and provides $5,000 scholarships to as many as four UGA students, as well as to UPNA students who opt to study at UGA. The Erasmus-Plus grant will also fund faculty and staff from the two universities who visit the partner institution to further solidify the program.

Compared with many international study programs, the UPNA-UGA partnership was completed in record time, according to Vicki McMaken, associate director for the Office of Global Programs.

“It’s a credit to Dr. Ferreira’s strong ties at UPNA and the well-timed grant funding that this program came together in less than a year,” McMaken said.

Although the program wasn’t fully approved until November 2017, undergraduate student Abigail Pierce got a head start by applying in September, not knowing if the program would actually be available for the spring semester.

Fortunately, all of the details were completed and Pierce arrived in Spain in January and took courses in environmental science, international and public law, and two courses in Spanish during her semester of study.

“My experience in Pamplona and my travels beyond have been truly incredible,” she said. “I was not expecting to meet so many diverse individuals from all over the world, be immersed in a different culture and find so much joy in being out of my comfort zone.”

Pierce, who will begin her senior year this fall at UGA, where she is majoring in agricultural communication and earning an International Agriculture Certificate, said the Erasmus-Plus program at UPNA was a particular benefit.

“The program welcomed over 100 international students this semester, all of whom I was given opportunities to meet,” she said, adding that she participated in a variety of experiences with other Erasmus-Plus scholars both within Pamplona and in travel outside the city.

Like Ferreira, Pierce said studying abroad has changed her perspective about herself as well as other countries and cultures.

This fall, two more CAES students — Charles Orgbon and Alexandra Bull — and a third from UGA’s Franklin College of Arts and Sciences will begin a semester of study in Pamplona, and four students will travel from Spain to UGA. In addition, two UPNA faculty members and a staff member, who focus on student recruitment and support for exchange programs, are scheduled to visit UGA this year.

Students interested in participating in the UGA-UPNA exchange should contact CAES Director of Experiential Learning Amanda Stephens at amanda10@uga.edu or 706-542-5276. 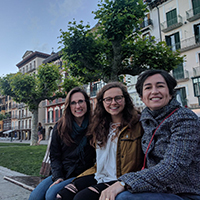