Plant diseases, such as phytophthora blight, fruit rot, downy mildew, gummy stem blight and anthracnose, have a tendency to take hold in watermelon fields as a result of heavy moisture.

“While some places in southern Georgia may have had only a couple of inches of rain in the last couple of weeks, there have been other places that have had more than 8 or 9 inches. Thus far, growers have been diligent with their fungicide sprays, and disease has not been a problem that has impacted farmers across the board. But, due to conditions in specific locations, it may become an issue,” UGA vegetable horticulturist Timothy Coolong said.

Tifton, Georgia, received less rainfall from June 1 to June 18 this year than last year — 2.6 inches compared to 3.26 inches. However, there have been 13 rainy days in Tifton during this period in 2017 compared to just seven rainy days this time a year ago.

“Conditions are certainly not ideal. I think if you ask most growers, they would prefer warm and dry conditions. Earlier this spring, the weather was warmer and drier than is typical, but with continuous rain events like we’ve had recently, conditions are now favorable for the development of several diseases,” Coolong said.

“Last year, the second week in June was quite warm. The temperature was in the low- to mid-90 degree range every day for several days. The high temperatures with clear skies caused sun scald damage to the melons,” Coolong said. “This week is supposed to be mostly cloudy, meaning less potential for sunburn. But the disadvantage is that the wet weather could lead to more disease potential.”

The accumulated rainfall means growers must pay the extra cost of chemical applications. Farmers could invest $70 or $80 per acre in a spray program to combat these diseases, Coolong said.

“If you add that up over several hundred acres, it is a significant weekly expense,” he said. “I would say that vegetable growers prefer dry conditions. Spray control for these diseases can be very expensive.”

Watermelons are grown predominantly in south Georgia and had a farm gate value of $124.5 million in 2015, according to the UGA Center for Agribusiness and Economic Development. 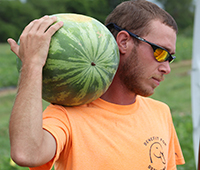