University of Georgia Cooperative Extension research trials of new tobacco varieties could help farmers reduce the level of black shank disease in their fields to 15 percent, according to Tony Barnes, Agriculture and Natural Resources Extension agent in Atkinson County, Georgia.

If the research proves successful, Georgia tobacco farmers who plant these new varieties could save as much as $1,463 per acre as compared to farmers who grow varieties impacted by black shank disease.

“We are seeing success in some of the newer varieties, but in a severe year, it doesn’t matter what the variety is, black shank will eat it up,” Barnes said. “We are getting better responses from these varieties, though.”

Black shank is a fungus that turns the tobacco plant yellow as it slowly wilts and dies. The disease spreads through the field and to other fields through water and equipment. Chemical treatment programs must be applied to ensure older tobacco varieties withstand the disease, which can wipe out a crop under the right conditions, according to Barnes.

“A farmer generally makes about $4,180 per acre. If the farmer takes a 50 percent loss due to black shank, which is not uncommon with some of our older varieties, the financial return is reduced to $2,090 per acre. That is just not profitable after input costs are calculated,” Barnes said.

The weather plays a role in treatment applications in severe years. Since black shank moves upward through the tobacco plant, chemical applications must be made to the base of the roots. The roots must then absorb the treatment before it leaches out. If it rains, farmers can’t get into the field to apply the treatments, leaving their plants vulnerable.

“There are varieties that are not resistant, but the growers like them because of how they grow and cook out. However, if they plant those varieties in a field that is infected with black shank, they’re probably going to lose a lot of their crop,” Barnes said.

Barnes advises growers to stay out of fields with a history of black shank disease for at least two years, but preferably for four to six years.  Additionally, UGA Extension experts advise growers to clean their tractors, equipment and trucks before moving from one field to another field to avoid spreading the fungus.

In 2015, Atkinson County farmers cultivated 582 acres of tobacco. The county ranked ninth in Georgia for tobacco production, with a farm gate value of more than $2.4 million.

Georgia tobacco farmers can learn more about black shank disease during the Georgia-Florida Tobacco Tour, which is set for June 12-14. The tour will visit the UGA Tifton campus, where participants will learn about tobacco research on Tuesday, June 13, and Wednesday, June 14. To learn more or to register for the event, visit https://t.uga.edu/3i1. 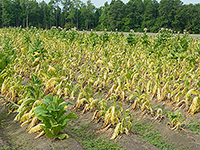