May’s warm, wet conditions brought relief to the parched areas of the state, and Georgians can expect more of the same in June.

The rain was welcomed by farmers, but so much rain in such a short period of time delayed planting in some areas and caused erosion and flash-flooding problems.

This was the wettest May in Savannah’s 144-year record, beating out the old monthly record of 11.13 inches set in 1915. It was also the sixth-wettest May for Macon, Georgia, in 121 years.

Low daytime temperature records were also set on May 5 at a number of stations including Atlanta, Athens, Columbus and Macon, with maximum temperatures on that date reaching only the mid-50s. Columbus’ new record of 57 F beat its old record of 66 F set in 1987.

March frost damage estimates continue to come in — about 80 percent of the peach crop was lost as well as 85 percent of the blueberry crop. Many farmers will not have any fruit to sell outside of the state.

The outlook for June shows that an increased chance of cooler- and wetter-than-normal conditions is likely, particularly in the northern half of the state. Drought is expected to recede in the southern counties, and dry conditions are likely to be eliminated farther north. The summer forecast still shows an increased chance of above-normal temperatures, particularly in the driest areas.

For more information, please see the “Climate and Agriculture in the South East” blog at blog.extension.uga.edu/climate/ or visit www.gaclimate.org. Please email pknox@uga.edu to share your agricultural weather and climate impacts on the blog. 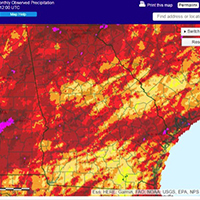